Coal mining to expand on public lands in Wyoming 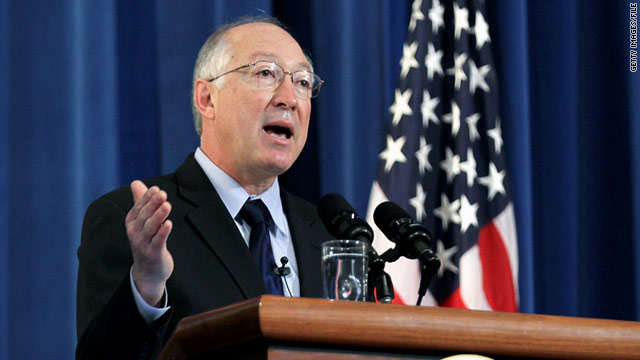 (CNN) -- Coal mining on public lands will expand in the coming months in Wyoming, as the federal government makes more coal-rich land available for lease by mining companies.

The four tracts of land in northeast Wyoming's Powder River Basin are expected to yield about 758 million tons of coal, Salazar said.

"Wyoming is the No.1 coal producer from public lands, contributing more than 400 million tons annually to our domestic energy supply, providing nearly 40% or the coal used by power plants nationwide to provide electricity nationwide," Salazar said.

"Coal is a big deal here in Wyoming," Mead said. "We need the energy, we need the jobs that come with energy, and we need the electricity."

The announcement comes at a time of uncertainty for America's energy needs. Unrest in the Middle East and North Africa has sent oil prices up, and problems at the troubled Fukushima Daiichi nuclear power plant in Japan have led to questions about the safety of nuclear power.

"We ought not be subjected to the ups and downs of what happens in the Middle East or in Libya, so part of it is moving us towards an energy-independent America," Salazar said.

On the nuclear issue, the interior secretary said that safety precautions will be looked at in light of the problems in Japan, but the administration will continue to push for an expansion of nuclear power in the United States.

"Nuclear energy as a significant component of the energy future of the United States remains unchanged," Salazar said.

Mead said he also hopes to see nuclear energy expand in Wyoming, noting that the state has the largest amount of uranium reserves in the country.

"I think it can be done safely," he said. "You can have all the safety and all the environmental stuff you can, but you need a timeline that is reasonable."