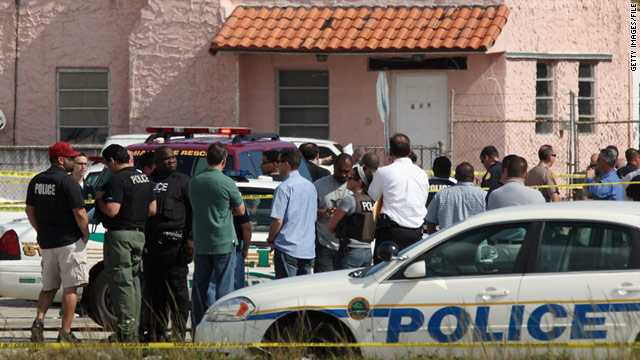 Police stand near the spot where two Miami, Florida, police officers were shot in January, one fatally.
STORY HIGHLIGHTS

Holder's comments came as he met with a group of police chiefs and the heads of several federal law enforcement agencies to talk about the problem. He said the initiative will involve all U.S. attorneys around the country meeting with their local police and others to discuss the issue and to try to find solutions.

According to data compiled by the National Law Enforcement Officers Memorial Fund, 49 officers have been killed this year through Monday, compared with 41 for the same period last year, an increase of 20%. Holder said 23 of those officers lost their lives due to gunshot wounds, including five who worked in federal law enforcement.

The attorney general said after a two-year decline, officer deaths "spiked by nearly 40 percent" with the loss of 162 officers in 2010. In 2009, 117 officers were killed.

Holder did not offer a theory on why police and other law enforcement officers are encountering so much violence now.

When asked if the Obama administration would call for new legislation -- possibly including a ban on extended ammunition clips like those allegedly used by suspect Jared Loughner in the January shootings in Arizona that killed six people and wounded 13 others, including Rep. Gabrielle Giffords -- Holder said nothing is "off the table," but he said he wants to look at how existing laws are carried out first.

In a memorandum to all U.S. attorneys, Holder asked them to look for the "worst of the worst" criminal offenders who "cycle in and out of local jails and state prisons" and see whether they might be charged with federal crimes that would carry stiffer prison sentences.

The Justice Department already has some programs in place to combat violence against police officers, Holder said, including a program in which the federal government provides bulletproof vests to officers around the country.