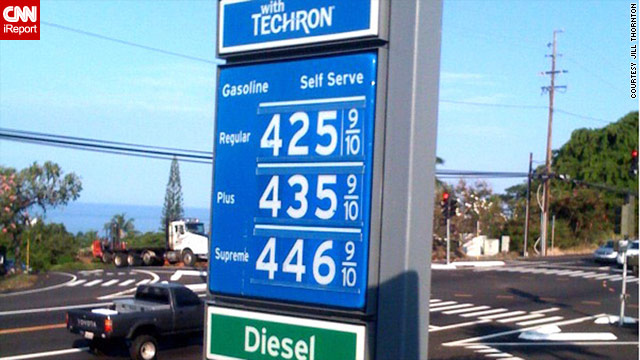 Think your gas prices are high? Consider Hawaii. An iReporter snapped this photo of gasoline at almost $4.26 a gallon.
STORY HIGHLIGHTS

(CNN) -- Gas prices have jumped nearly 7 cents a gallon over the past two weeks, reaching a level more than 75 cents higher than they were a year ago, according to a survey published Sunday.

The average price for a gallon of self-serve regular is $3.57, the Lundberg Survey found. That's 6.65 cents higher than the price the same survey found two weeks earlier.

The latest spike suggests that the dramatic price increases are slowing down, said publisher Trilby Lundberg. Between February 18 and March 4, the survey had found an increase of about 33 cents. That hike corresponded to an increase in crude oil prices amid unrest in more than a dozen countries in the Middle East and north Africa, six of which are OPEC members, Lundberg said.

The new jump in prices at the pump comes despite a drop in crude oil prices over the past two weeks. Lundberg described that as "follow-through" from the previous spike in oil prices.

The survey was taken Friday, before several countries began military action against Libya. It is too soon to know what impact events in Libya will have on gasoline prices, Lundberg said Sunday.

Gas prices: How high will they go?

The Lundberg Survey tabulates prices at thousands of gas stations nationwide. Of the cities included in the latest survey, the lowest average price was in Billings, Montana, at $3.27 a gallon. The highest was in San Francisco, California, at $3.97.