How Clinton got behind the military coalition 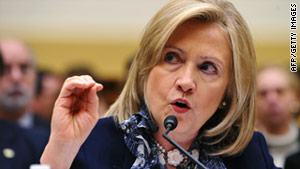 Washington (CNN) -- President Barack Obama's decision to undertake military action in Libya to enforce a no-fly zone was the product of an administration debate with unlikely bedfellows.

Initially, Secretary of State Hillary Clinton was skeptical of the U.S. joining a military coalition. But senior U.S. officials said advances last weekend made by forces loyal to Gadhafi in retaking rebel strongholds in the east, which opened up the possibility of thousands more being killed, convinced her action was necessary.

Additionally, a statement by the Arab League calling for the United Nations to enforce a no-fly zone, Clinton told reporters Saturday, "changed the diplomatic landscape."

As Britain and France pushed for a quick U.N. Security Council resolution authorizing a no-fly zone, officials said Clinton teamed up with Susan Rice, U.S. ambassador to the United Nations, in creating the conditions for a resolution with the broadest possible authority and the largest international support.

Clinton made the case that U.S. support for a no-fly zone was conditioned on Arab participation and leadership. In Paris, Clinton met with her counterparts in town for a meeting of the Group of 8 foreign ministers and with Abdullah bin Zayed, the foreign minister of the United Arab Emirates. Even as she criticized the UAE for its recent decision to send forces to quell a rebellion in Bahrain, Clinton pressed him to send planes to Libya.

As Clinton traveled to Cairo and Tunisia seeking Arab buy-in for the resolution, officials said Rice built support in New York for the resolution. Samantha Power, an adviser to Obama on the National Security Council and a human rights activist, was also urging the president to intervene.

Clinton's alliance with Rice and Power in pushing for intervention put her at odds with Defense Secretary Robert Gates, who had publicly argued against a no-fly zone. Sources said Vice President Joe Biden was also more cautious, arguing for the smallest possible U.S. involvement in any military action.

A senior administration official said that "like the president, the vice president wanted any action taken with a broad international coalition." The official, who spoke on the condition of anonymity to discuss sensitive military planning, said when the vice president "saw that was achievable, he supported the policy to seek the military intervention."

After meeting with Amr Moussa, secretary general of the Arab League, in Cairo Tuesday night, officials said Clinton called Obama, telling him the Arabs were willing to take part in the no-fly zone. That participation, officials said, was critical for the administration, which was concerned about the perception of invading a third Arab country.

"In order for us to go along, it was important for the Arabs to have some skin in the game," one senior official said.