Traces of radiation from Japanese nuclear plant surface in California 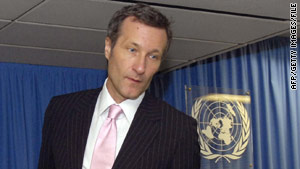 (CNN) -- A radiation monitor in California has detected a trace of radioactive material from the stricken nuclear power plant in Japan, the Comprehensive Test Ban Treaty Organization said Friday.

The exact amounts were not available, but the test ban organization's executive secretary, Tibor Toth, said the measurements were below what would be considered harmful to human health.

The treaty organization's chief press officer, Annika Thunborg, said its officials were "absolutely certain" that the radiation detected in California is from Fukushima because the isotypes were consistent with those emitted by the Fukushima reactors, and the timing of their detection is consistent with projections.

The test ban organization maintains a worldwide network of monitoring stations to look for evidence of nuclear explosions that could violate the prohibition in its namesake treaty, which has not come into force, against nuclear weapons testing. The treaty has been ratified by 153 nations but the United States is not one of them.

The organization announced Friday that it has started sharing its monitoring data and analysis reports with the International Atomic Energy Agency and the World Health Organization because it could prove useful in cases like Japan's.

The Sacramento monitor detected minute amounts of radionuclides -- substances that emit radiation -- which had been expected, Toth said.

The EPA, in a statement, confirmed that a monitoring station in Sacramento that feeds into the treaty organization's monitoring system "detected minuscule quantities of the radioactive isotope xenon-133, a gas that is produced during nuclear fission. The origin was determined to be consistent with a release from the Fukushima reactors in northern Japan."

It added, "These types of readings remain consistent with our expectations since the onset of this tragedy, and are to be expected in the coming days."

It said the EPA's system "has not detected any radiation levels of concern."

It described the exposure as "approximately one-millionth of the dose rate that a person normally receives from rocks, bricks, the sun and other natural background sources."

EPA spokesman Francisco Arcaute said monitors at three sites operated by the South Coast Air Quality Management District for the EPA have not recorded anything higher than the typical "background" levels seen before the March 11 earthquake and tsunami in Japan.

"We do not expect to see harmful levels of radiation," he said.

The test ban organization's discovery is no cause for alarm, said Graham Andrew, an official with the International Atomic Energy Agency.

"As of now, there are no concerns in Japan or elsewhere about human health," he said.

California public health officials had predicted Thursday that some radioactive particles might be detected but predicted that they would pose no danger.

Even before the discovery, some drugstores in California were running out of potassium iodide, which prevents some of radioactive iodine's harm to the thyroid.

Public health officials have urged people not to take potassium iodide as a preventive measure. It collects in the thyroid, protecting it from absorbing radioactive iodine. But it carries its own side effects, especially for people who have allergies to iodine or shellfish, or who have thyroid problems.

CNN's Matthew Chance and Jonathan Wald contributed to this report.