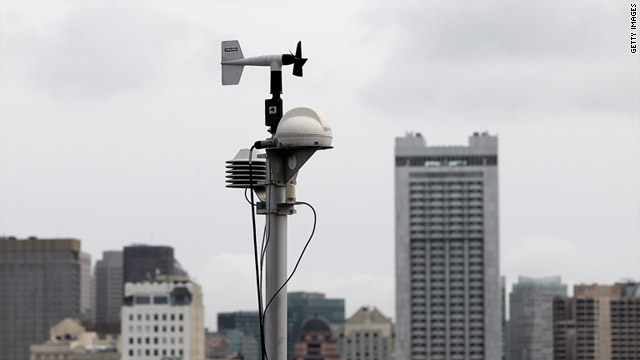 Radiation monitors on the West Coast have not detected elevated levels of radiation.
STORY HIGHLIGHTS

(CNN) -- Instead of worrying about the unlikely event of harmful radiation drifting from Japan, Californians should focus on preparing for earthquakes and other emergencies common in their own state, officials said.

Radiation from the tsunami-damaged Fukushima Daiichi nuclear power plant in Japan will dissipate over the more than 5,000 miles separating it from California, but eventually it may be detected in small, non-harmful amounts, said Dr. Howard Backer, interim director of the state Department of Public Health.

"We do not anticipate any amounts of radiation that will cause any health effects," Backer said Thursday.

In Washington, President Barack Obama went further in telling Americans not to worry.

"Whether it's the West Coast, Hawaii, Alaska or U.S. territories in the Pacific, we do not expect harmful levels of radiation," Obama said. "That's the judgment of our Nuclear Regulatory Commission and many other experts."

There has been no detection of elevated levels of radiation on the West Coast, and experts say there is no way to predict how long it would take for radiation drifts to cross the Pacific. Even if that happens, the amount may be too small to be detected, experts said.

Because of the way the radiation would likely travel, it would take "days" to reach the United States, and would probably first be detected in Alaska.

"There's no marker that we can follow to know if any minimal radiation reaches the West Coast," Backer said.

Meanwhile, some drugstores in California are running out of potassium iodide, which prevents some of radioactive iodine's harm to the thyroid. State health officials don't know how many people are preventatively taking potassium iodide, but they strongly discourage taking the medicine. It carries its own side effects, especially for people who have allergies to iodine, shellfish or who have thyroid problems.

Potassium iodide is part of the planning in communities around nuclear power plants in the state of California, in case of emergency, but will not be necessary in the U.S. for radiation from Japan, Backer said.

Rather than going out and getting potassium iodide, Backer said, Californians should buy a three- to five-day supply of food and water so that when their earthquake-prone state has its next temblor, they can be self-sufficient.

California has eight monitoring stations for radiation in addition to the Environmental Protection Agency's air-monitoring sites. The public will be updated about radiation levels, officials said.

And although radiation may get into ocean water drifting from Japan, there are no concerns about surfers or bathers at California's beaches, said Dr. Jonathan Fielding, director of the Los Angeles County Department of Public Health. The radiation will disperse so quickly that there will not be a significant increase of radioactive material in seafood either, Backer said

On a national level, the U.S. Food and Drug Administration is collecting information on all food products regulated by the agency that are exported to the U.S. from Japan, the FDA said. This is being done so that the agency can evaluate whether these products will pose a risk to consumers in the future.

The FDA is not concerned about the safety of food products from Japan that have already been distributed, the agency said. The FDA already screens imports and is monitoring for any trace of increased radiation in imported products.

"The biggest health impact is the psychological impact," Fielding said.