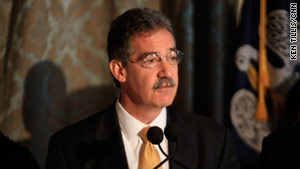 (CNN) -- A federal investigation found that the New Orleans Police Department has engaged in patterns of misconduct in violation of the Constitution and federal law, the Justice Department announced Thursday.

Among the findings are that the police department has used excessive force, made unconstitutional stops and searches, and illegally profiled people based on race, ethnicity and sexual orientation. The investigation also found a number of practices that contributed to the illegal conduct, including failed systems for recruiting and promoting officers, poor training and lack of supervision, among others.

"Today is both a day for concern and hope," U.S. Deputy Attorney General James Cole said.

Many of the New Orleans officers carry out their jobs well, he said, but "unfortunately, our conclusions reveal that many New Orleans police officers have failed to live up to what we rightfully expect from our law enforcement people."

"I believe there is no question that this plan will catapult our department," he said.

In a May 2010 letter sent to Attorney General Eric Holder, Landrieu asks for a team from the department's civil rights division to help the city address and prevent police misconduct.

"I have inherited a police force that has been described by many as one of the worst police departments in the country," Landrieu said in the letter.

"It is clear that nothing short of a complete transformation is necessary and essential to ensure safety for the citizens of New Orleans," it said. "The police force, the community, our citizens are desperate for positive change."

Within his first week in office, Landrieu also announced he had tapped Serpas -- a New Orleans native who was then police chief in Nashville and had a track record of reducing violent crime -- as the city's new police superintendent to lead reforms.

The investigation was not related to any ongoing federal criminal prosecutions of officers, officials said. Federal prosecutors have investigated several New Orleans police officers involved in a shooting on the Danziger Bridge four days after Hurricane Katrina roared ashore in 2005.

Two civilians were killed in that shooting -- a 19-year-old man and a severely disabled 40-year-old man. Four people were hurt. Former city police officer Robert Barrios pleaded guilty in federal court in April 2010 to a charge he failed to report a cover-up of the shooting. His plea came after guilty pleas related to the incident from three other former New Orleans police officers: Michael Lohman, Jeffrey Lehrmann and Michael Hunter.

"Today's findings should serve as a foundation not only to rebuild the police department but to help restore the community's trust in fair, just and effective law enforcement," Cole said.

The investigation was carried out with the support of the mayor and the police superintendent.

"Our investigation has shown that the problems and challenges confronting the NOPD are serious, wide-ranging, systemic and deeply rooted in the culture of the department," said Thomas E. Perez, assistant attorney general for the Civil Rights Division.

For example, investigators found that officers "regularly used excessive force as retaliation" but that in six years, not one officer-involved shooting violated policy. In some cases, there were attempts to prevent the prosecution of officers, Perez said.

They also found that officers did not know the law regarding legal stops, searches and arrests. The system at the police department favored quantity of arrests over quality, Perez said.

"Our next step will be to work with the (police) department to develop a consent decree, which will involve federal oversight," he said.

Perez said as part of that consent decree, benchmarks will be established to make sure the police department is improving. He said the benchmarks will address areas such as racial profiling and use of force.

Investigations of city police by the Justice Department are not uncommon, but cities themselves rarely initiate them, Merrick Bobb, executive director of the Police Assessment Resource Center in Los Angeles, told CNN when the New Orleans probe was launched last year.

District of Columbia officials took a similar approach in 1999 when they asked the Justice Department to investigate whether city police were using excessive force, he said.