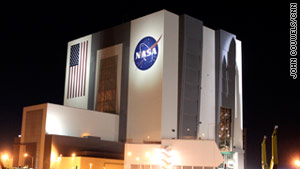 NASA has a zero-tolerance drug policy, and all employees may be randomly tested.
STORY HIGHLIGHTS

"Law enforcement personnel field tested the substance, which indicated a positive test for cocaine," said Renee Juhans, an executive officer with the office.

"The substance is now at an accredited crime lab for further testing," she said.

Juhans said that 4.2 grams of a white powdery substance was found in a NASA facility March 7. She could not confirm where, at the Kennedy Space Center, the drug was found.

"A NASA Office of Inspector General investigation is ongoing," she said.

NASA has a zero-tolerance drug policy. All employees may be randomly tested. It is not known whether any employees have been asked to submit to drug testing in this investigation.

In January 2010, about 200 Kennedy Space Center workers were tested when a small bag of cocaine was found inside a space shuttle processing facility where Discovery was being readied for flight. That case was closed, and there were no arrests.