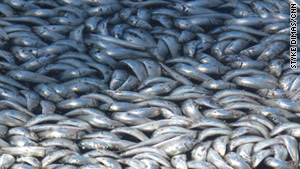 David Caron, a University of Southern California professor of biological sciences, said his team took samples and found traces of a toxin that caused the fish to become disoriented and swim chaotically into the marina.

"We looked at the stomachs of the sardines because we have had recurring toxic algal blooms ... in our coastal waters in recent years," Caron said. "We were interested to see if we could find or if we could detect a particular type of neurotoxin ... called domoic acid and these fish were positive for domoic acid."

At the time, local authorities and scientists said the fish were washed into the harbor by strong winds and waves, then died from oxygen deprivation -- there were too many fish and not enough oxygen for all of them.

Caron agrees that lack of oxygen was the ultimate cause of death.

"On the day of the event we observed a very precipitous drop in the dissolved oxygen concentration in the harbor," according to Caron, who said the domoic acid may have made matters worse.

Caron said the domoic acid poisoning may have exacerbated the stress the fish were under due to the low oxygen, or the poisoning could have contributed to the huge congregation of fish near King Harbor.

Either way, Caron suggested that more testing on the fish may be necessary.

"We have not detected the toxins in the harbor at all. It is in the fish," he said.

A week after the massive kill, public works crews and volunteers are still trying to clean up the stinky mess and keep the toxins from getting to the water from the rotting sardines.