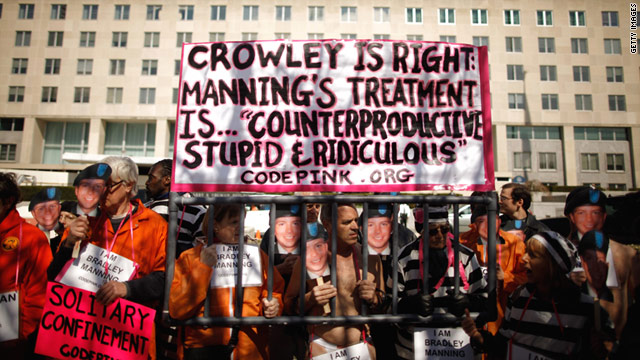 Protesters demonstrate outside the State Department in Washington on Monday. They're calling for the release of WikiLeaks suspect Pfc. Bradley Manning.
STORY HIGHLIGHTS

Washington (CNN) -- Protesters -- some of them virtually naked on a breezy 50-degree March afternoon -- noisily demonstrated outside the State Department and marched to the White House Monday, calling for the release of WikiLeaks suspect Pfc. Bradley Manning.

Manning's case, and details of his detention at the Marine Corps Base in Quantico, Virginia, have drawn new attention in the aftermath of comments by State Department Spokesman, P.J. Crowley, and Crowley's sudden weekend resignation.

Amidst reports that Manning had been forced to sleep without clothing and confined to his cell 23-hours a day, Crowley had criticized how Manning was held at Quantico, calling it "ridiculous and counterproductive and stupid," according to news reports. Crowley was the face and voice of the Obama administration on the full-range of diplomatic issues and is a former Air Force colonel.

Manning has been jailed at Quantico since July and is awaiting a military decision on whether he will face a court martial. He is accused of downloading classified government files that the Defense Department believes are the source of thousands of documents released by WikiLeaks.

President Barack Obama, in response to a question, chose to defend Manning's detention at a Friday news conference, and after that Crowley's hours were numbered, with Secretary of State Clinton accepting his resignation "with regret" Sunday.

Monday morning, Pentagon spokesman Col. Dave Lapan repeated earlier statements that Manning is held in accordance with rules governing all maximum-custody detainees at Quantico, for his protection and the safety of others. He said that Manning is not currently on suicide watch but rather "POI" status, for "prevention of injury."

"Whether his status changes is a matter that's reviewed regularly down at the brig at Quantico," Lapan said.

In the past, because of concerns Manning might harm himself, he had been forced to sleep naked, Lapan confirmed.

"There was a period of time, for several days, where after making a comment that called into question his personal safety that his undergarments were removed from him at night during the sleeping period. He has since been given a sleeping garment to wear at night," Lapan said Monday at the Pentagon.

"During the period that his undergarments were taken from him, he still had bedding, he still had blankets. And he was again in the morning during daylight hours, given his standard issue jumpsuit."

Since then, Lapan said, Manning had been given a tear-proof sleeping garment.

Of the fewer than 20 protesters gathered outside the State Department three men stripped to undergarments -- specifically, athletic supporters -- to protest Manning's sleeping conditions.

One of those, Jay Marx, said he didn't believe the military's statements about Manning's treatment. "They are not protecting him. They are trying to drive him insane," Marx said.

Some of the protesters held up mock jail-cell bars with a banner that read, "Crowley was right: Manning's treatment is 'counterproductive, stupid and ridiculous.'"

Others shouted out march-cadence chants, including "Hillary, Hillary, can't you see? Bradley Manning speaks for me," and "Telling the truth isn't a crime, Bradley Manning shouldn't be doing time."