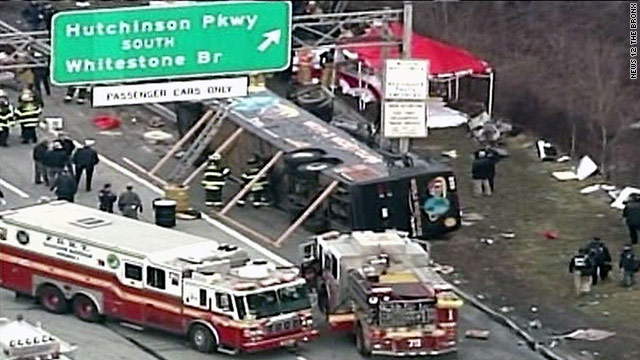 The bus was returning from a Connecticut casino when it overturned.
STORY HIGHLIGHTS

New York (CNN) -- The bus company involved in an accident that left 15 people dead in New York this weekend has been involved in at least two other crashes with injuries in the past two years, government records show.

The company has been cited five times for "fatigued driving" between December 2009 and October 2010 -- twice in in New Jersey, twice in Pennsylvania and once in Connecticut, records show.

At least 14 passengers died early Saturday after the driver of their tour bus lost control of the vehicle and struck two sign poles, one located directly behind the other, on Interstate 95 in the Bronx, New York police said.

World Wide Travel declined to comment to CNN, despite repeated calls, other than to refer to a published statement saying the company was "heartbroken" at the deaths and injuries.

"We are a family owned company and realize words cannot begin to express our sorrow to the families of those who lost their lives or were injured in this tragic accident," the company statement said. "Our thoughts and prayers are with them. We will continue to use every resource at our disposal to assist and work with investigators to determine what happened."

The crash occurred about 5:30 a.m. on a stretch of I-95 called the New England Thruway near the Bronx-Westchester County line, officials said. The accident forced the closing of I-95 in both directions until late Saturday, police said.

Along with those who were killed, eight of the 31 passengers suffered severe injuries and were transported to area hospitals with the remaining survivors. At least five people being treated at New York's St. Barnabas Hospital suffered skull and spinal fractures, internal bleeding and broken bones, Dr. Ernest Patti told reporters.

The bus, which had departed from the Mohegan Sun Resort and Casino in Uncasville, Connecticut, was bound for Chinatown in Manhattan, according to news reports.

Five of the injured were taken to St. Barnabas Hospital, 14 were transported to Jacobi Medical Center.

Passenger Chung Ninh, 59, who suffered only a hand inury, told reporters he was asleep when the accident occured. Ninh said he woke to find himself hanging upside down in his seat belt, surrounded by other passengers either screaming or dead and covered in broken glass.

Ninh he said he tried to help an unconscious woman nearby.

"I put my hand on the neck and no movement, no nothing," Ninh told reporters.

Police said Williams told investigators that the accident occurred after he swerved to avoid a tractor-trailer that might have clipped the bus. The bus then flipped on its side and smashed into the poles, which cut through two thirds of the vehicle.

Police recovered a tractor-trailer that was traveling through the area at the time and interviewed the vehicle's driver.

The driver of the tractor trailer denied that two vehicles collided before the bus crashed, the law enforcement source told CNN.

"We're treating him as a witness, not a suspect," according to the the law enforcement source, who is involved in the investigation.

Meanwhile, federal investigators are considering other potential causes of the crash, including mechanical problems, steering and brake issues as well as the possibility the driver fell asleep. Some surviving passengers, according to news reports, told police that they felt the bus roll over rumble strips before the crash.

At a Sunday afternoon press conference, National Transportation Safety Board Vice-Chairman Christopher Hart said investigators are looking for video recordings taken at the casino and, possibly, an electronic hotel key card that might track some of Williams' activities within 72 hours of the accident.

Police officials have said they are also looking into the possibility that the bus driver had been speeding prior to the accident. Two UPS couriers told CNN affiliate WABC-TV that they twice saw the bus traveling very fast on the highway before the accident.

"I felt my vehicle shake from the turbulence of the wind," driver Joe Insalata told WABC

"When we saw the logo on the back of the bus, we were like, 'World Wide Tours,'" Berman told WABC. "'That's the guy that passed us about 15 minutes ago at a very high rate of speed.'"

"And that was when Joe was like, "I'm calling the cops,'" Berman said.

Investigators are examining Williams' background and testing his blood for the presence of alcohol. New York State Police Maj. Michael Kopy said Saturday a video camera had been recovered from the bus, but that investigators had not yet viewed it.

Hart described the video as coming from a "forward looking camera" that had been installed on the bus.

Meanwhile, the bus engine control module, also known as the black box, was sent to an NTSB laboratory in Washington, D.C.

NTSB investigators visited the crash site for the first time Sunday. According to Hart, skid marks left by the bus show the vehicle hit the guardrail on the right of I-95 "at least three times" over the course of 480 feet before crashing into sign posts that sliced through the vehicle.