Sailor says Navy punishing him for sleepover with male sailor 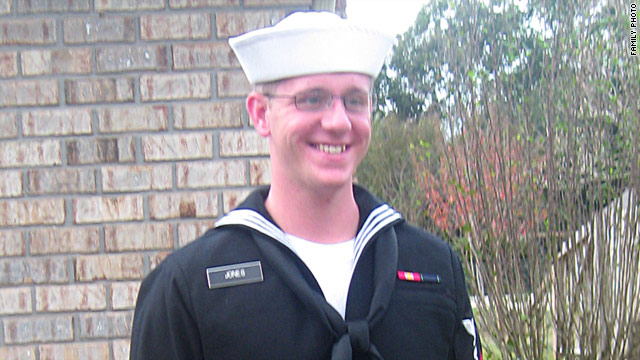 A sailor is accusing the Navy of trying to discharge him after being found asleep in the same bed with another male sailor.
STORY HIGHLIGHTS
RELATED TOPICS

(CNN) -- A sailor is accusing the Navy of baselessly trying to discharge him for "unprofessional conduct" in an effort to get around the recent "don't ask, don't tell" repeal, after being found asleep in the same bed with another male sailor.

Navy Petty Officer Stephen Jones, a student at the Naval Nuclear Power Training Command in Charleston, South Carolina, told CNN that on the night of February 5, a male sailor stopped by to watch the CW TV show "Vampire Diaries."

"He has come over to watch shows in the past," Jones said.

The two watched the show on his bed but accidentally fell asleep. Jones says his roommate walked in around midnight.

"My roommate walked in and it woke me up," Jones said. He then woke up his friend, Navy Petty Officer Bryan McGee, who according to Jones, immediately left the room.

But the Navy is proceeding with discharging Jones, charging him with "willful failure to exhibit professional conduct," Jones' lawyer, Greg Myers said.

"It is a violation of the Command Instruction for sailors to act unprofessionally in the barracks. It is considered unprofessional conduct to share the same bed in Navy barracks," said Thomas Dougan, a spokesman for the Naval Nuclear Power Training Command.

Jones, who claims nothing sexual happened, said they were both clothed, him in pajama pants and a white t-shirt and McGee in boxers, and that two were not under the covers together. Jones was lying above the covers while McGee lay below.

The play-by-play given by Jones is substantiated by the Naval investigating documents, although a different account on the amount of clothing worn was given by Jones' roommate who claimed in his naval statement that both sailors were only dressed in their boxers.

Jones' roommate, who was uncomfortable by what he saw, according to Myers, Jones' attorney, moved out of the room a day later and reported the incident to command officials. An investigation was launched, ending with the Command attempting to punish Jones and McGee by a "Captain's Mast," a non-judicial procedure meant to avoid a court martial.

McGee, who declined to comment on the case, accepted the mast and punishment but Jones refused, moving the Navy to begin proceedings to discharge him. Punishment by Captain's Mast could have resulted in loss of rank, forfeiture of pay, or jeopardized Jones' top secret security clearance, Myers said.

"I'm not pleading guilty to something that I didn't do. I did not commit a crime," said Jones. "I am the type of person that takes responsibility for my actions. If I break a rule, I take my punishment. And I know I did not break any rules."

Myers also said he is adamant that no crime was committed.

"In the end, Jones was charged with falling asleep while watching a show on his computer while on his bed over the covers where another man under the covers was also sleeping. This is not a crime and never will be as there was and is no duty to avoid such a circumstance as a matter of laws," said Myers in a statement sent to the Navy.

Jones and his lawyer charge that the Naval Command suspects Jones of being gay and wants to discharge him for that reason alone.

"This Command suspects that Jones is a homosexual but has no proof. It cannot invoke 'don't ask, don't tell' because there is no homosexual conduct and there is no admission of homosexuality. Yet this homophobic Command is using its suspicions to reach the same result as though there were," said Myers. "This is bigotry disguised as the rule of law."

President Obama signed the so-called "don't ask, don't tell" repeal into law in December but it's not officially off the books until Secretary of Defense Robert Gates, the Chairman of the Joint Chiefs of Staff and the President give the OK that the military is ready to implement the repeal.

For now, the "don't ask, don't tell" policy remains in place, although no military personnel have been discharged under that policy since October, when Gates changed procedures to have such separations reviewed at the highest levels, a point, Myers says, was not forgotten by the Naval Command.

"The Secretary of Defense has said that 'don't ask, don't tell' cases will be reviewed at the highest levels. This case is disguised as misconduct to avoid that result," said Myers. "This is a subterfuge being used by this Commander because he does not have the elements of proof to separate him for homosexuality, but he suspects homosexuality, so he has created this illusion that Stephen has engaged in misconduct of some form."

The Navy denies the separation proceedings are based on the suspicion of homosexual behavior.

"Naval Nuclear Power Training Command is not administratively processing either of these sailors for separation based on sexual orientation," said Dougan.

But one gay rights group worries this case may be an example of some in the military trying to get around the "don't ask don't tell" repeal by charging suspected homosexuals with other offenses.

"We've seen this before," said Alex Nicholson, executive director of Servicemembers United, the nation's largest organization of gay and lesbian troops and veterans. "Here is the classic text book case of trumping up charges and exaggerating an event to try to punish someone. And this is exactly what the senior defense leadership has said would not and should not happen when DADT goes away."

For now, the 21-year-old Jones says that even though he is disappointed in the Naval Command, he just wants to keep his job and finish his training to become a nuclear operator on an aircraft carrier or a submarine.

"I enjoyed my job. I enjoyed the environment and I was interested in what I was learning. It has been challenging but it was definitely something that I wanted to complete," said Jones.