Analysis: Is the U.S. using uprisings to blame, discredit Iran? 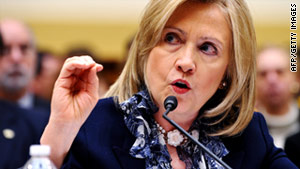 Hillary Clinton told senators that Iran has made efforts to "influence events" in Egypt, Bahrain and Yemen.
STORY HIGHLIGHTS

Washington (CNN) -- The protests sweeping the Middle East appear to be entirely indigenous, borne of discontent with unemployment and the lack of personal freedoms, but that hasn't stopped top U.S. officials from suggesting Iran has a part and trying to send a message to Tehran.

The U.S. seized upon the hypocrisy coming from Iran in celebrating the revolutions in Tunisia and Cairo as a vindication of its 1979 Islamic revolution, while crushing it own opposition with a violent crackdown.

As Defense Secretary Robert Gates pointed out this, the behavior of the militaries in Tunisia, Egypt and Bahrain "contrast vividly with the savage repression that the Iranians have undertaken" against protesters in their own country.

U.S. officials have taken advantage of a rich target of opportunity to de-legitimize the Iranian government, both in the eyes of the region and its pro-government supporters inside the country.

However, the Obama administration has sent mixed messages on Iran's actual role in the unrest that has taken over much of the Middle East and parts of Africa.

Secretary of State Hillary Clinton rang the alarm bell this week when she told senators that Iran has made efforts to "influence events" and coordinate with opposition movements in Egypt, Bahrain and Yemen through their proxies, such as Hezbollah and Hamas.

"So either directly or through proxies, they are constantly trying to influence events," she said Wednesday. "They have a very diplomatic foreign policy outreach."

But just a day before, at a joint news conference with Defense Secretary Robert Gates, America's top military official called Iran the "real loser" amid the unrest.

"They've had no hand in the change sweeping the region, except the one they have used to slap back their own people," Adm. Mike Mullen, chairman of the Joint Chiefs of Staff said. " ... And while I do not share the same worry that others harbor about Iran's role in fomenting the unrest, we are seeing no indications of any credible influence from Tehran in that regard."

Still, he warned that, "The U.S. military will not lighten our load, we will not dull our focus on the security commitments we have made or on preserving our ability to thwart the actions of any hostile state in the region."

So does Iran have a hand in the tumult, or is it simply marveling in the chaos? And at a time the U.S. is in talks with Iran about the whereabouts of former FBI agent Robert Levinson, who disappeared in Iran four years ago and whose case now shows promise of being resolved, is this the time for the U.S. to make Iran the boogeyman of the crisis?

The U.S. is rightly concerned that many of the transitions taking place in the region are not seamless. Already in Tunisia, the hope of a quick democratic fix has proven elusive. In Egypt, the military has been slow to implement the kind of political reforms that would get protesters off the streets.

The U.S. fears that absent any organized transition, Iran will try to gain influence by taking advantage of any kind of power vacuum.

Tehran has long tried to establish toe holds in Bahrain and other Gulf countries with Shiia populations, where unrest could work to its advantage.

Yet, Iran has been relatively muted in Bahrain's uprising and was far more gleeful about events in Egypt.

Afshin Molavi, a senior fellow at the New America Foundation and author of "Soul of Iran," argues that "Iran tends to be more adventurous in its foreign policies when the countries are not in their immediate neighborhood."

For the most part, Molavi notes, "Iran has been relatively muted on Bahrain's unrest, while far more vocal regarding Egypt." They have made the strategic choice not to confront the Persian Gulf states, preferring to engage them diplomatically and through trade, he said.

Because the protests in Bahrain illustrated an across-the-board discontent with their rulers, Molavi says it was wise for Tehran to hold back.

Bahrain's rulers have already hinted that Iran was behind the protests, as a way to try to discredit the motivation of those demonstrating. It was a charge furiously denied by protesters.

Iran sees itself as a powerful regional actor. And its hardline Islamic government does have a history of pushing for elections in the region -- not so much because of a belief in democracy, argues Molavi, but because it believes such votes will produce governments that are more sympathetic to Iran's view of the Israel-Palestinian conflict and other regional issues. Iran sees that while many authoritarian regimes in the region have cooperated with U.S. policies in the region, there is a widespread anti-American and anti-Israeli sentiment among the public.

Take Iraq, for example. After Saddam was defeated, Iran was in favor of early elections, knowing full well Iraqis would elect a Shiia government more sympathetic to Iran, while the United States was in favor of waiting.

In this case, Iran sent money and intelligence officers into Iraq to ensure its interests were represented in the country's political future. Of course, the U.S. also accused Iran of trying to undermine the government by supporting the insurgents through weapons, training, people and money.

"The reality is that Iran would certainly like to have significant influence in countries like Egypt, Tunisia and Yemen," Molavi argues.

"But the reality on the ground belies the fact of their real potential to do so. These countries are not Iraq or Afghanistan and don't have the same historical, cultural, and commercial links with Iran. And therefore Iran's ability to influence events on the ground is more limited."

When Mullen said, "the U.S. military will not lighten our load, we will not dull our focus on the security commitments we have made or on preserving our ability to thwart the actions of any hostile state in the region," it was a two-pronged message: one of reassurance to nervous allies that the United States will stand by them if Iran tries to capitalize on the unrest in their countries and a not-so-subtle threat to Iran that Washington is watching.

The Arab spring, however, can be a double-edged sword for Iran.

Yes, it may produce governments that are less friendly to the United States and more sympathetic to Iran's regional ideology. But it could, U.S. officials hope, also inspire Iranians to wonder when their time for freedom will come; a question Iran's regime will be forced, sooner or later, to answer.