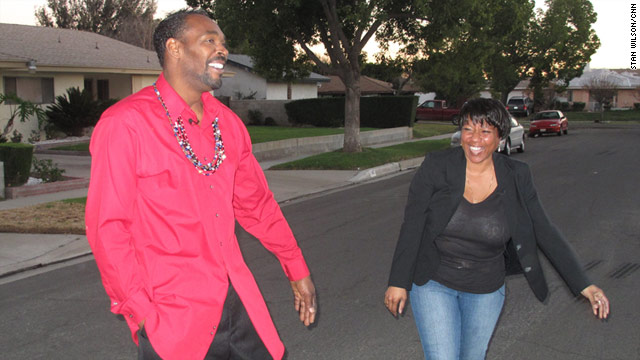 Rodney King and Cynthia Kelly, seen here in a lighter moment during an interview, were riding together when he was stopped.
STORY HIGHLIGHTS

Tune in Saturday at 8 p.m. ET/11 p.m. ET as CNN looks back at the Rodney King beating and the events that divided Los Angeles and the nation on "CNN Presents: Race and Rage."

(CNN) -- Some 20 years after his beating at the hands of Los Angeles police, Rodney King was pulled over in Arcadia, California, this week after allegedly running a red light, his fiancee said Thursday night.

Cynthia Kelly said she was riding with King on Tuesday when the traffic stop occurred. King was then was cited for driving without a license, she said.

Kelly was a juror in King's civil trial against the city of Los Angeles in 1994, in which he was awarded $3.8 million.

King talks to CNN about the 1991 beating

Four officers were charged with assault with a deadly weapon and excessive use of force but were acquitted of state charges on April 29, 1992.

The three days of rioting that followed in Los Angeles and other U.S. cities left 55 people dead and 2,000 injured. There were 12,000 arrests and about $1 billion in property damage in Los Angeles.

Since then, King has had a handful of run-ins with the law, including a guilty plea in 2004 to driving under the influence of a controlled substance and reckless driving.

In a recent interview with CNN's Don Lemon, King said he forgave the officers involved in the 1991 beating.

"I've been given a break many times in life, everybody's entitled to a break," King said. "I didn't die, you know what I mean?"