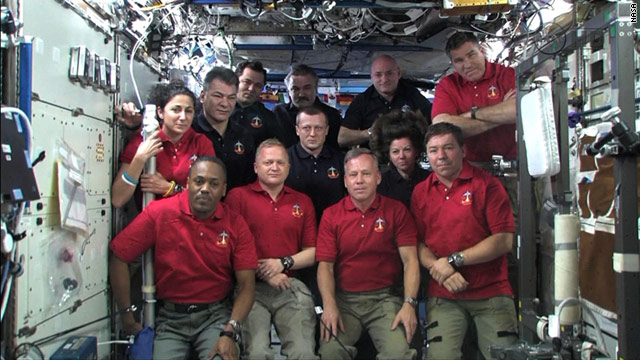 President Obama told the Discovery astronauts how proud he is of them and their mission.
STORY HIGHLIGHTS

(CNN) -- President Barack Obama called the 12 men and women aboard the space shuttle Discovery and the international space station Thursday to congratulate them on their mission.

"I wanted to call and say how personally proud I am of you and all that you are accomplishing," Obama told astronaut Scott Kelly.

Scott Kelly is the brother of astronaut Mark Kelly, who is married to Rep. Gabrielle Giffords, D-Arizona. Giffords was shot at a political event in January.

Obama remarked on how proud Discovery Commander Steven Lindsey must be on the shuttle's final mission. Discovery has logged more time in space than any other shuttle in the U.S. space fleet.

"We think that when we land, that Discovery would have flown in space for a total of 365 days ... a whole year ... which is pretty incredible," Lindsey said.

Shuttle Discovery is scheduled to land at Florida's Kennedy Space Center shortly before noon next Wednesday -- one day later than originally scheduled.

The nearly three decade shuttle program is scheduled to end later this year.

During a lighthearted moment, Obama asked about the newest member of the space station -- Robonaut 2, or R2 , the first "humanoid" robot in space.

The robot, a joint venture between NASA and General Motors, currently consists solely of an upper torso. It is scheduled to be matched with lower extremities later, however, allowing it to fulfill some mundane daily tasks for the space station's crew.

"Are you guys making him do chores or do dishes up there?" Obama asked. "Or does he have more exciting jobs?"

Lindsey explained that R2 had just been loaded aboard the space station and had not yet been unpacked.

Lindsey told Obama that stretching noises could be hear coming from the robot's packing foam. It was the robot's way, he said, of communicating the message "Let me out."

"I don't know exactly when I'll be unpacked yet," R2 tweeted earlier. "But keep watching. I'll let you know when I do!"