After ban, Harvard to allow ROTC back on campus 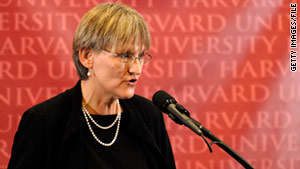 (CNN) -- Harvard University moved Thursday to allow ROTC programs to set up on campus, after years of restricting the U.S. military's access because of its "don't ask, don't tell" policy.

The Cambridge, Massachusetts, school barred Reserve Officers' Training Corps programs from being based on its campus 40 years ago, at the height of the Vietnam War.

For more than a decade, university leaders -- among them, former law school dean and current U.S. Supreme Court Justice Elena Kagan -- have cited the military's policy prohibiting gays and lesbians from serving openly as the chief rationale for continuing the ban.

Harvard President Drew Faust cited the recent decision to overturn that policy as the genesis for the university's new tact. She will sign an agreement Friday with Navy Secretary Ray Mabus to re-establish a home for ROTC on campus, the school announced in a press release.

"Our renewed relationship affirms the vital role that the members of our armed forces play in serving the nation and securing our freedoms, while also affirming inclusion and opportunity as powerful American ideals," Faust said in the statement.

The full, formal recognition will take effect once repeal of the so-called "don't ask, don't tell" law, which had made it against military policy for homosexuals to serve openly, is complete this summer, according to the release. Harvard will appoint a director for the Navy ROTC program and take over direct financial responsibility for the cost of students to participate in the program.

Congress voted to repeal the policy in December, setting off a three-part process. Last month, for instance, all four branches of the U.S. military began training required as part of the repeal.

The university is setting up a committee, to be chaired by professor Kevin "Kit" Parker, a U.S. Army Reserve captain who served three tours in Afghanistan, to look into a host of issues, including bringing other military branches back onto campus.

Harvard was one of the first six educational institutions, in 1926, to host Naval ROTC programs, the Navy noted in a release. Once the change goes into effect, active-duty Navy and Marines personnel will meet on campus with students participating in the ROTC program.

Harvard's own policy regarding ROTC on campus was the subject of national attention eight months ago, when Kagan -- who was then a nominee for the high court -- came under criticism by Republican senators who complained that she actively tried to block military recruiters from Harvard Law School when she was dean.

Kagan and the White House strongly defended her actions, saying that while she opposed the military's policy, Kagan never kept recruiters off the university.

Four months after taking the job as Harvard's dean, in October 2003, Kagan sent a campus-wide email to students saying that to give recruiters equal access to the campus "causes me deep distress. I abhor the military's discriminatory recruitment policy." She called the "don't ask, don't tell" policy "a profound wrong -- a moral injustice of the first order."