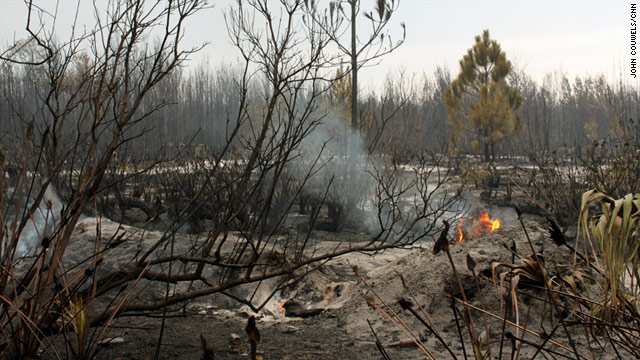 As of Thursday morning, the fire had burned 17,434 acres of land, said Annaleasa Winter of the Florida Division of Forestry. The fire burned another 1,500 acres Wednesday night, she said, fueled by winds of about 20 mph. The fire was 25% contained, she said.

But winds calmed down overnight, she said. More lines have been laid on the western portion of the fire, and new resources were expected Thursday. Authorities plan on hitting the fire heavily, Winter said.

The blaze prompted the closure of Interstate 95 for a time Wednesday because of heavy smoke.

The fire, which began Monday, has destroyed a mobile home, several outbuildings and several camp structures, the Florida Department of Agriculture and Consumer Services said.

More than 150 personnel have been deployed to help fight the blaze, according to the Florida Division of Forestry.

Cliff Frazier, a wildfire mitigation specialist with the Florida Division of Forestry, said Wednesday that winds were pushing much of the smoke out to sea, and no new structures appeared to be in danger.

Mike Townsend's property in Brevard County was among those scorched by the fire.

Firefighters were making progress on a second blaze that has burned close to 2,000 acres in St. Johns County, south of State Road 206 on Interstate 95 below St. Augustine, officials said Wednesday.

The cause of both fires is not yet known. Frazier said Tuesday the combination of severe freezes this winter that killed surface vegetation and low rain totals made conditions ripe for a fire.

The South Florida Water Management District said Wednesday the central and southern portions of the state are experiencing "extreme dry conditions." The period between October 2010 and February 2011 was the driest period in southern Florida in 80 years, the district said.