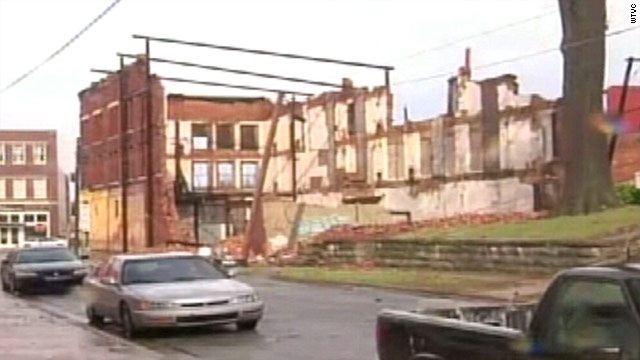 Read local coverage of the severe weather at CNN affiliates WTVC and WOIO.

(CNN) -- Severe weather descended on the Southeast Monday, killing at least one person, reducing homes to rubble and leaving drivers stranded in flooded streets as the storm system moved northward up the East Coast.

One man was killed in Tennessee after being pinned by a trailer that was lifted by strong winds, said Sgt. Chris Guess, a spokesman for the Franklin County Sheriff's Office. A woman in the home was taken to a hospital with back and leg injuries, he said.

The winds also downed trees and caused significant damage in the northern part of the county, northwest of Chattanooga, Guess said, adding that the sheriff's office could not yet confirm whether the destruction was due to a tornado.

About 37,000 homes and businesses were without power in the Chattanooga area as of 3 p.m., Lacie Newton of Electric Power Board told CNN affiliate WTVC.

In Henry County, the twister leveled two homes, leaving nothing behind but foundation and concrete, according to Michael Webb, public information officer for the state police in Campbellsburg, Kentucky.

Three people were asleep in one home when it started "breaking apart," Webb said.

The residents tried to escape the twister's fury by running from their home to their car, but the car was blown several feet from its parked position and overturned before it slammed into a tree with all three people inside, Webb said.

First responders found everyone doing OK when they arrived on the scene, Webb said.

Two people in the second home destroyed by the tornado sustained minor injuries from the storm and were treated at a local hospital, he said.

Forecasters are warning other states to be on the lookout for damaging winds.

High winds to the east didn't produce any tornadoes, but were strong enough to knock down power lines and damage road signs in St. Louis.

The winds that ripped through the state were accompanied by heavy rains that left motorists stuck in their cars on flooded streets in Kansas City, Missouri.

To the north, in Ohio, Illinois and Indiana, the scene was similar.

Widespread flooding was expected in Indiana and Ohio Monday afternoon, Morris said. Much of the area has seen 2 to 5 inches of rain in the past week, he said.

The rising water flooded streets and businesses in and around Cleveland, where a flash-flood warning was issued Monday morning after an operator at Gates Mill Dam on the Chagrin River in Cuyahoga and Lake counties reported that the dam burst.

Officials said the river, which was already experiencing major flooding, could rise even more.

The raging water from the dam flowed downstream into portions of Willoughby Hills, Willoughby and Eastlake. The rushing water submerged streets and flooded homes.

Residents stranded by the high water were being rescued from their homes Monday evening, video from CNN affiliate WBNS showed.

Larry Greene, with the Lake County Emergency Management Agency, told CNN affiliate WOIO that property and structure damage estimates won't be available until the water starts to recede, but no injuries were reported from the dam failure.

A slight risk of severe thunderstorms continues for portions of middle and eastern Tennessee, northern Alabama, Georgia and as far as western North Carolina.

Tornado warnings were issued Monday afternoon and into the evening for the Atlanta metro area as heavy rains and wind moved into the region, according to the National Weather Service. Downed trees were reported in Acworth, about 30 miles northwest of downtown Atlanta.

Those thunderstorms could also affect the lower Mississippi Valley east and northeastward to the mid-Atlantic and southeastern Atlantic coasts.

Forecasters say a cold front was surging eastward across the area, triggering severe storms and bringing additional rain to Tennessee and Kentucky where flood watches remain in effect through Thursday evening.

CNN's Dave Alsup and Tristan Smith contributed to this report