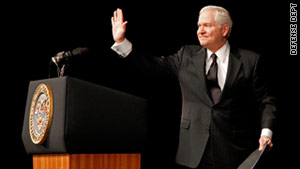 Washington (CNN) -- Defense Secretary Robert Gates, in what he said is his final address to the cadets at the U.S. Military Academy, warned Friday against the United States getting involved in another major land battle.

He told the cadets that wars like Afghanistan are not likely, and in fact he would advise against it.

"In my opinion, any future defense secretary who advises the president to again send a big American land army into Asia or into the Middle East or Africa should 'have his head examined,' as Gen. MacArthur so delicately put it," Gates said.

Gates remarks contrasted with some in America who are pushing for the U.S. military to take a more active role in other places like Libya, where huge groups of protesters are trying to overthrow the government of Col. Moammar Gadhafi.

The defense secretary told cadets they'll be leading a force that has drastically changed how it fights.

Gates, who has previously announced he intends to retire this year, said it's impossible to know what the next war, that these cadets will be part of, will look like.

"When it comes to predicting the nature and location of our next military engagements, since Vietnam, our record has been perfect," he said. "We have never once gotten it right, from the Mayaguez to Grenada, Panama, Somalia, the Balkans, Haiti, Kuwait, Iraq and more -- we had no idea a year before any of these missions that we would be so engaged."

But he said he is confident that future engagements involving the Army will less likely include head-on clashes of large mechanized armies.

"In the competition for tight defense dollars within and between the services, the Army also must confront the reality that the most plausible, high-end scenarios for the U.S. military are primarily naval and air engagements," he said.

He told the cadets at West Point that preparing themselves for a range of possible missions is a key to success.

"The military will not be able to train or educate you to have all the right answers -- as you might find in a manual -- but you should look for those experiences and pursuits in your career that will help you at least ask the right questions," he said.

Gates encouraged the future Army officers to look outside the armed forces for experiences that will make them better soldiers and leaders.

"Such opportunities might include further study at grad school, teaching at this or another-first rate university, spending time at a think tank, being a congressional fellow."

And he encouraged them to "become a master of other languages and cultures."

He said it's not just the cadets who need to adjust to this new world, it's the Army itself. He said that the wars in Iraq and Afghanistan have created a group of highly-experienced, battle tested young officers who too often leave the Army just when it needs their skills and knowledge the most.

"Men and women in the prime of their professional lives, who may have been responsible for the lives of scores or hundreds of troops, or millions of dollars in assistance, or engaging in reconciling warring tribes, they may find themselves in a cube all day re-formatting power point slides, preparing quarterly training briefs, or assigned an ever expanding array of clerical duties," Gates said. "The consequences of this terrify me."

He said the Army must adapt so that young officers with diverse experience and accomplishments are rewarded with promotions and that it must "re-think the way it deals with the outstanding young leaders in its lower and middle-ranks."

He wrapped up his speech on a personal note, telling the cadets said he feels responsible for each and every one of them "as if you were my own sons and daughters," Gates said apparently on the verge of tears. "I bid you farewell and Godspeed."