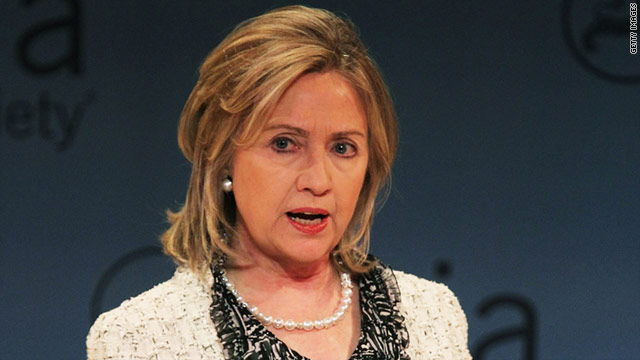 Secretary of State Hillary Clinton said Friday that the Taliban would have no choice but to abandon al Qaeda in Afghanistan.
STORY HIGHLIGHTS

New York (CNN) -- Taliban insurgents in Afghanistan will be unable to withstand mounting U.S. pressure and their only option will be to break with al Qaeda and join a peaceful dialogue on the country's future, U.S. Secretary of State Hillary Clinton said Friday.

"They cannot wait us out. They cannot defeat us. And they cannot escape this choice," Clinton said in a major address on U.S. policy in Afghanistan and Pakistan.

In her remarks to the Asia Society, Clinton reaffirmed President Barack Obama's pledge to begin withdrawing troops this July, based on conditions on the ground, and said all troops will be out of the country by the end of 2014.

Clinton said the United States and its NATO allies in Afghanistan are simultaneously pursuing "three surges" aimed at ending the nearly decade-old conflict. The military offensive will be supported by civilian efforts to bolster Afghanistan's government and an "intensified diplomatic push," she said.

"As the military surge weakens the insurgents and pressures them to consider alternatives to armed resistance, the civilian surge creates economic and social incentives for participating in peaceful society," Clinton said.

Also being launched, she said, is a "diplomatic surge to move this conflict toward a political outcome that shatters the alliance between the Taliban and al Qaeda, ends the insurgency and helps produce a stable Afghanistan and a peaceful region."

"That would leave al Qaeda alone and on the run," she said.

Although the reconciliation process must be Afghan-led, Clinton said, it will draw in other countries in the region and the international community.

Such efforts could build upon President Karzai's plans for reconciliation, including the Peace Jirga in June and the High Peace Council which is holding meetings throughout the country. The process, she said, must be accepted by "all of Afghanistan's major ethnic and political blocs" and must include women.

She said that in order to join reconciliation efforts, the Taliban must renounce violence, abandon their alliance with al-Qaeda, and abide by the constitution of Afghanistan.

"If former militants are willing to meet these red lines, they would then be able to participate in the political life of the country under the constitution," she said.

She acknowledged that the success of reconciliation efforts depends on the participation of Pakistan, which she said plays a "pivotal role."

While Clinton said Pakistan will have to be part of the process and its concerns must be taken into account by the Afghan government, she also said Pakistan must respect Afghan sovereignty and take steps to prevent the Afghan Taliban from conducting the insurgency from Pakistani territory.

Warning that Pakistan is at risk of major instability that would hamper the war effort in Afghanistan, she urged the Pakistani government to implement broad reforms and stop fomenting anti-American sentiment.

Clinton announced that retired veteran diplomat Marc Grossman, a former U.S. ambassador to Turkey who served in Pakistan early in his career, will be the new special representative for Afghanistan and Pakistan, replacing Richard Holbrooke, who died in December.

As Republicans in Congress propose sharp budget cuts, Clinton warned it is critical to maintain funding for Afghanistan's civilian reconstruction.

"Retreating from the civilian side of the mission -- as some funding proposals currently before Congress would do -- would be a grave mistake," she said.