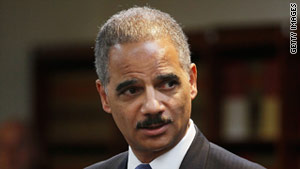 Washington (CNN) -- Federal authorities indicted and arrested more than 100 doctors, nurses and health care executives nationwide Thursday in what officials said was the biggest crackdown ever in a single day in connection with Medicare fraud.

Holder said that at the time of the midday news conference in Washington, the number of arrests stood at 111 and was expected to increase later in the day.

The arrests occurred in nine cities. Thirty-two defendants including two doctors and eight nurses were charged in Miami with various fraud schemes.

Another 21 defendants were charged in Detroit, along with 11 in Chicago; 10 in Brooklyn, New York; 10 in Tampa, Florida; nine in Houston; seven in Dallas; six in Baton Rouge, Louisiana; and five in Los Angeles.

"Doctors, nurses, and medical professionals from Los Angeles to New York and cities in between have cheated taxpayers and patients alike by defrauding the Medicare program," declared Assistant Attorney General Lanny Breuer.

Officials from the Justice Department and the Department of Health and Human Services said the cost of enforcing health care fraud laws is proving to be a good financial investment. Last year, federal agencies recovered a record $4 billion from fraudsters.

"From 2008 to 2010, every dollar the federal government spent under its health care fraud and abuse control programs averaged a return on investment (of) $6.80," Health and Human Services Secretary Kathleen Sebelius said.

With the growing pot of federal money for Medicare expected to increase by more than $6 trillion in the next decade, officials said they recognize the potential allure of Medicare to potential fraudsters and to organized crime groups.