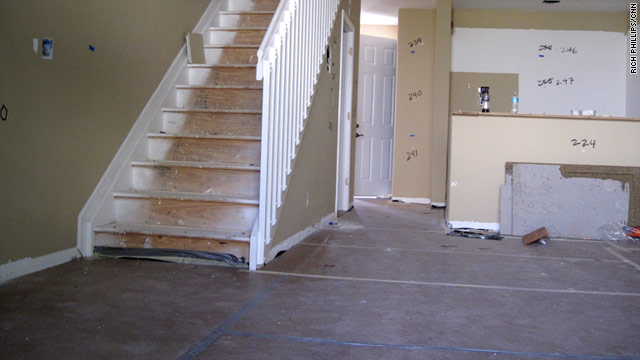 Eleanor Aguilar's townhome in Lauderhill, Florida, will be gutted down to the wall studs to get rid of its Chinese drywall.
STORY HIGHLIGHTS
RELATED TOPICS

Lauderhill, Florida (CNN) -- Eleanor Aguilar pounded a hole in her living room wall on Monday. You might say it was a way to strike back at the Chinese drywall that, she says, made her sick, caused her appliances to die, and chased her out of her house.

"They gave me this huge hammer and they said, 'Do you know what you're doing?' I said, 'Just get out of my way,'" she said.

"I smacked a hole in the wall and walked out. It's phenomenal," she said.

It was her way of helping the contractors who were there for a three-month project.

Aguilar's townhouse in Lauderhill, Florida, is about to be gutted, right down to the wall studs. It's the first house in the United States to be remedied as part of a pilot program by Knauf Plasterboard Tianjin, which announced last year that it would renovate the homes that were built with its product.

"When you see the Dumpsters and see the crews ... it really hits you. A Chinese company is compensating U.S. victims," said Aguilar's attorney, Allison Grant.

The U.S. Consumer Product Safety Commission has determined that Chinese drywall imported into the United States by Knauf Plasterboard and other companies during 2005 and 2006 emits extraordinarily high levels of hydrogen sulfide, causing an array of problems in homes in 42 states, Puerto Rico and American Samoa.

It was imported during a period when increased hurricane activity and a real estate boom had created drywall shortages. So the United States turned to China to fill the need.

The Safety Commission says it has received almost 3,800 complaints about the drywall nationwide.

Metallic objects in homes with the bad drywall corroded and turned black. Copper air conditioning coils and electrical wiring and appliances failed, and people complained that their houses were making them sick.

The Safety Commission recommends that consumers remove all of the problem drywall from their homes and replace electrical components, wires, smoke alarms, fire suppression systems and natural gas pipes. Knauf Plasterboard has agreed to do that in 300 homes in four states.

Aguilar said she spent thousands of dollars to replace television sets, computers and printers that mysteriously failed, while her home began to smell like rotten eggs from the hydrogen sulfide coming from the walls.

"I'm going to have to buy new furniture, new computers, all my coffee pots and radios have died," she said. "It eats everything."

After suffering from upper respiratory problems, nosebleeds and migraine headaches, Aguilar said her doctor recommended she move out. So she left her home in Lauderhill and is now living about 20 miles south in Miami. After she made the move, she says, her health got better.

The Safety Commission is now conducting tests at the Sandia National Laboratory in New Mexico to determine what safety problems the homes with Chinese drywall are at risk for.

The remediation program announced by Knauf Plasterboard Tianjin last year came after U.S. District Judge Eldon Fallon in Louisiana ruled against the drywall manufacturers and said that plaintiffs were entitled to damages. He ordered that their homes be gutted.

Another drywall company involved in the case, Taishan Gypsum, owned by the Chinese government, is appealing the ruling.

In addition to gutting and remodeling the 300 homes in Alabama, Mississippi, Louisiana and Florida that were built with its product, Knauf Plasterboard is paying compensation to the residents for their expenses during the work.

"The program is not an admission of legal liability," said Greg Wallance, an attorney representing Knauf Plasterboard. "We recognize there is a problem for these homeowners. We wish that the product had worked better, and we really hope to remedy the inconvenience."

Knauf Plasterboard says it does not have a dollar figure on the cost of this program.

"We think this is the right way to go and solve the problem for these homeowners," Wallance said.

But there are thousands of homeowners that are still in limbo. Their drywall was manufactured by several other Chinese companies, and they can't afford the thousands and thousands of dollars to pay for the work themselves. Many have moved out of their homes and are forced to pay the mortgages on those homes as well as rent on their new residences.

Others have been forced to remain in the homes that are making them and their families sick. Homeowners insurance will not cover them because the drywall is considered a defective product.

"We are going to have to go against corporations that are part owned by the Chinese government. That's going to be a long, hard fight," said plaintiffs' attorney Robert Brown.

So far, U.S. officials have had trouble getting answers in this international dilemma, which has risen to the State Department level. U.S. officials say they have made numerous requests for meetings.

"Those companies, to date, have not agreed to come to the table for an in-person meeting," Wolfson said.

Aguilar said she hopes to be back in her home in about three months, perhaps in time for Mother's Day.

Her home will be inspected once all of the work is complete to insure that the corrosive hydrogen sulfide is gone.

"It's going to be nice to get my home back," she said.