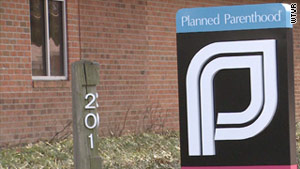 Planned Parenthood says its staff will be retrained to respond to situations that suggest the welfare of a minor is in danger.
STORY HIGHLIGHTS

(CNN) -- Responding to the latest undercover video by an anti-abortion group, women's reproductive health care provider Planned Parenthood announced Tuesday it will retrain more than 11,000 staff members at more than 800 centers across the United States.

Planned Parenthood has ordered "all health center staff and educators who have contact with patients and teens be retrained in understanding our policies and procedures for responding to situations that indicate that the welfare of a minor is endangered," Stuart Schear, vice president for communications at Planned Parenthood, said in a statement issued Tuesday.

The retraining will be completed by April 1, Schear said.

The announcement came in the wake of the anti-abortion group Live Action's sixth undercover video of a Planned Parenthood clinic that purportedly shows staff "willing to assist sex trafficking and exploitations of minors and young women," group president Lila Rose said in a written statement.

Affirming a zero tolerance policy Tuesday, Planned Parenthood said in a statement that employees will be fired in cases of confirmed failure to comply with the group's procedures for situations involving endangered minors and with states' mandatory reporting laws for underage girls.

The Live Action videos are reminiscent of those by right-wing videographer James O'Keefe, who targeted ACORN, an organization that advocated for low- and middle-income people and worked to register voters. Those videos purported to show a "pimp" and a "prostitute" asking for advice on setting up a brothel and evading taxes.

O'Keefe's videos were found in at least two investigations to be so heavily edited as to be an unreliable record of what happened, showing no evidence of any wrongdoing by ACORN staff members. But those investigations were completed too late to save the organization.

The Live Action videos also appear to be heavily edited. All were apparently taped in January, when Planned Parenthood says it learned of at least 11 undercover visits in six states over one week "in which persons claiming to be involved in sex trafficking with minors asked for services for young women." Schear said he expects more Live Action announcements about the other visits.

Planned Parenthood reported the visits to the U.S. Justice Department before any of Live Actions videos were released.

Like the prior ones, the latest secretly recorded video uses a couple portraying themselves as a pimp and a prostitute who are seeking abortions for underage girls.

Last week, Live Action released undercover videos of four Planned Parenthood health centers in Virginia and one in New Jersey. Planned Parenthood officials fired a staff worker in the New Jersey office, but defended the others by saying they behaved professionally and appropriately reported the incidents to the U.S. Justice Department.

The latest video claims to show a Planned Parenthood staffer and a supervisor in the Bronx borough of New York City guiding the pimp and prostitute actors on how to get abortions for girls as young as 13.

But the Bronx video was "clearly doctored and cannot be trusted," Schear said.

"The truth is that Live Action has a history of doctoring video, making false claims and has no credibility," Schear said in a statement. "This is a tactic similar to that of James O'Keefe, the discredited right-wing activist long associated with Live Action."

Unlike in the other publicized videos, the hoax visitors in the Bronx weren't able to get past the reception desk for a private consultation, Schear said.

The two Planned Parenthood workers in the Bronx told the FBI in an interview that "they did not hear the words 'sex work' or 'sex worker' uttered by the actors on camera," Schear said.

FBI spokeswoman Jenny Shearer declined to comment on the ongoing controversy about the undercover videos. "I can't comment on something I haven't seen. I'm unaware of which field office they are communicating with," she said Tuesday.

Schear described the undercover videos as "an effort to undermine the credibility of Planned Parenthood staff in Live Action's coordinated lobbying effort to support legislation that would bar Planned Parenthood from receiving federal funds." Congress is considering such a proposal, put forward by Republicans.

"Live Action's investigation has uncovered a serious, institutional crisis in which Planned Parenthood is willing to aid and abet sex trafficking and exploitation of minors and young women," Rose said in a statement. Live Action describes itself on its website as "a leading new media, investigative, and educational organization committed to the protection and respect of all human life."

Rose has said that her purpose in making the videos -- and making available the edited versions -- is to "take down" Planned Parenthood.

Cecile Richards, president of Planned Parenthood Federation of America, said the 95-year-old organization is the nation's leading provider of reproductive health care and serves 3 million patients a year. One in five women has come to its health centers at some point in her lifetime, she said.

"To further our commitment to our patients, we will continue to work to expand access to health care and coverage for women and oppose efforts, such as those currently before Congress, that would eliminate vital health care services that women and families need," Richards said.

Officials with Planned Parenthood of New York City said that if underage girls came into the center, "they would have met with a licensed social worker."

"All teens coming into Planned Parenthood of New York City are screened for child abuse and neglect. All teens who disclose abuse meet with a licensed social worker, who records and reports the abuse," the group said in a statement.