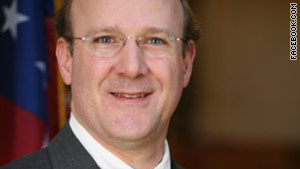 (CNN) -- A Georgia state lawmaker with a history of operating on the political fringe has filed a bill stripping the term "victim" from rape, stalking and domestic violence cases.

Rep. Bobby Franklin, a Republican from the Atlanta suburb of Cobb County, filed the bill in November but it only recently came to public attention.

Franklin's bill would eliminate the word "victim" from statutes dealing with stalking, rape, obscene telephone contact with a child and family violence and replace it with "accuser."

It also strikes the word "victim" from statutes dealing with electronic pretrial monitoring, HIV testing of criminal defendants and pretrial discovery, the exchange of crucial information between attorneys prior to the start of a criminal trial.

It wasn't clear why Franklin's legislation includes only those specific laws, or whether it would affect how people who file complaints about other crimes, such as child molestation, assault or theft might be described.

Franklin did not return a telephone message or e-mail to his office on Monday.

The proposed change angered some who felt that Franklin meant the legislation as an attack on rape victims and on women, who comprise the overwhelming majority of victims of sexual assault.

"I am dismayed ... angry ... and shocked by your wacked out ideologies concerning VICTIMS of rape," one commenter wrote on Franklin's Facebook page.

Carolyn Fiddler, the communications director for the Democratic Legislative Campaign Committee, wrote on the organization's website that the legislation diminishes rape victims by questioning whether what happened to them is even a crime.

In an interview with CNN Monday, Fiddler said she would like to think that Franklin didn't mean to diminish rape victims with the legislation. But she said the language displayed a "lack of empathy and awareness."

There is some merit in the idea of neutralizing legal and courtroom language to help focus potential jurors on the facts of a case, instead of the emotions raised by issues of rape and similar offenses, said Russell Gabriel, director of the University of Georgia School of Law's Criminal Defense Clinic.

"When we assume the facts that a jury is being asked to decide by presuming that an individual is in fact a victim, then we are undercutting some of the foundational principles of our legal system," Gabriel said.

Carol Tracy, director of the Women's Law Center, an advocacy organization, agreed with the call for neutral language, but said neither "victim" nor "accuser" are appropriate. In Pennsylvania, where she lives, the law references "complaintants," she said.

"It sounds a little hostile," Tracy said of the term Franklin proposed. "It doesn't have the ring of neutrality to me."

This is the second controversy this month over Republican legislation mentioning rape.

Last week, U.S. House Republicans changed the language in a bill limiting taxpayer funding for abortions after Democrats and others argued it narrowed a longstanding allowance for government funding of abortion in the case of rape by using the term "forcible rape."

Critics said the language would exclude abortion funding for the rape of unconscious or mentally incapacitated women, for instance.

Franklin, who also has filed legislation that would outlaw abortion in Georgia, is known for taking fringe positions that often chafe state House leaders, said Charles Bullock, a political science professor and expert in Georgia politics at the University of Georgia.

"He's been something of a loose cannon since he got in there," Bullock said.

Franklin recently attracted attention for filing legislation that would eliminate the need for Georgia residents to get driver's licenses, saying the government cannot abridge an individual's right to travel.

He has also filed a bill that would abolish all zoning laws in the state.