Kelly: I know wife wants me to command shuttle 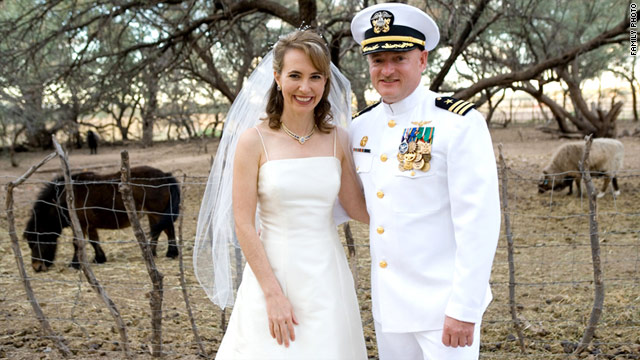 Astronaut Mark Kelly is the husband of U.S. Rep. Gabrielle Giffords, who was wounded in a shooting in January.
STORY HIGHLIGHTS

Washington (CNN) -- Astronaut Mark Kelly said Friday his wife's extraordinary medical progress since she was shot through the brain, coupled with support from family, friends and the public, were keys to his decision to command the upcoming flight of the space shuttle Endeavour.

During a press conference with NASA officials -- who said they determined going with Kelly was the right decision -- the husband of U.S. Rep. Gabrielle Giffords described what he thought the realities would be after the January 8 shooting in Tucson, Arizona, and what he now expects.

"At that time, my thought was I'd very likely would be sitting in the ICU seat, two, four or six months later, by her bedside," said Kelly, sporting a blue wristband that reads "Peace, Love, Gabby."

Now, he said, Giffords is making progress every day in speech, occupational and physical therapy.

He expects her to witness Endeavour soaring into space on the current April 19 timetable.

"Absolutely. I have every intention for her to be at the launch," said Kelly.

Command of the shuttle flight came under question after Giffords was shot.

"She would be very comfortable with the decision I made," Kelly said at a Friday afternoon press conference.

Kelly spent the days after the shooting at his wife's hospital bedside, and NASA had named a backup shuttle commander for the mission.

"We are very, very thankful of the progress Gabrielle has made over the past few weeks," said Brent Jett, chief of Flight Crew Operations Directorate at NASA.

"I know there are millions of people praying for her and I think that helps," Kelly told reporters.

NASA officials said they spent much of this week observing Kelly doing a simulated week of training in Houston. They said they are confident he will be able to complete the training and not be distracted by his wife's extensive rehab. The decision followed consultation with doctors and weighing the risks of putting Kelly back as commander.

"Space flight is a risky business," said Kelly. "So is being a member of Congress."

Kelly repeatedly declined to detail his wife's progress, saying it leads to constant speculation on her prognosis, and he would not disclose how she was able to articulate her support for his resumption of training Monday.

On Thursday, Kelly spoke at a National Day of Prayer event in Washington, his first trip away from Houston.

"We thought it would be a good chance for him to see what it would be like to be away from Gabrielle," Jett said.

Giffords is being treated at the Institute for Rehabilitation and Research (TIRR) at Memorial Hermann in Houston.

The six hours of therapy each day is keeping the congresswoman busy, Kelly said, and he has asked her mother to be his medical liaison while on training in Florida and during the two-week flight.

"I am looking forward to rejoining my (fellow) crew members and finishing our training for the mission," Kelly said in an earlier statement. "We have been preparing for more than 18 months. ... I appreciate the confidence that my NASA management has in me and the rest of my space shuttle crew."

The astronaut added he is able to "compartmentalize" stress and will remain focused.

In the end, the decision to put Kelly back on the team came down to what's best for the flight, Jett said.

"It's really as simple as that," he said.

CNN's Kevin Bohn and Alan Silverleib contributed to this report.