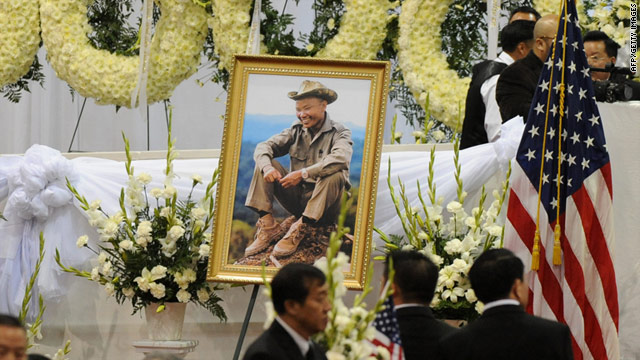 Washington (CNN) -- The family of a man who fought alongside U.S. troops in Vietnam have been told their relative will not be allowed to be buried at Arlington National Cemetery.

Major General Vang Pao led thousands of Hmong soldiers as they fought alongside the United States against the North Vietnamese Army during the war in Southeast Asia, according to a news release from Congressman Jim Costa of California.

Costa, on behalf of Pao's family, asked the Army to grant an exception to Arlington's rules to allow Pao to be buried in the nation's most hallowed burial ground.

Pao died recently of complications from pneumonia, according to Costa.

"The Vang Pao family's request for an exception to the burial policy was thoroughly reviewed by a board comprised of senior military and civilian officials. ... After a comprehensive analysis, the board unanimously recommended denial of the request for exception to policy. Upon receipt of the board's input, the Secretary carefully reviewed and deliberated on this matter and accepted the board's recommendation," according to a statement from the Army released Friday evening.

According to the cemetery's policy, Pao would have had to have served in the U.S. armed forces to be eligible for the honor.

The family can still ask Defense Secretary Robert Gates and President Obama to make an exception. A Pentagon spokesman said he did not know if any request regarding Pao's burial had reached Gates as of Friday afternoon.