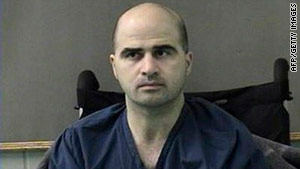 Washington (CNN) -- FBI and Army officials repeatedly ignored multiple warning signs that could have prevented the November 2009 massacre at Fort Hood, Texas, according to a long-awaited report released Thursday by two U.S. senators.

The inability to act was a result of both bureaucratic inefficiency and an unwillingness to identify and confront homegrown Islamic extremism, the report concludes.

Army psychiatrist Maj. Nidal Hasan is accused in the shootings, which left 13 people dead and 32 wounded. He faces a likely court-martial and potential death penalty.

"Although neither the Department of Defense nor the FBI had specific information concerning the time, place, or nature of the attack, they collectively had sufficient information to have detected Hasan's radicalization to violent Islamist extremism but failed both to understand and to act on it," the report says.

"Our investigation found specific and systemic failures in the government's handling of the Hasan case and raises additional concerns about what may be broader systemic issues."

Among other things, the report notes that a FBI Joint Terrorism Task Force had learned that Hasan was communicating with a suspected terrorist and flagged his communications for "further review." A second task force, however, subsequently dismissed the evidence and "dropped the matter rather than cause a bureaucratic confrontation."

Hasan reportedly communicated by e-mail with radical Yemeni cleric Anwar al-Awlaki. Al-Awlaki's name is not included in the publicly released version of the report.

Meanwhile, the Pentagon "possessed compelling evidence that Hasan embraced views so extreme that it should have disciplined him or discharged him from the military, but (Defense officials) failed to take action against him," the report says.

It concludes that Hasan's military officer evaluation reports were "sanitized" to minimize his "obsession with violent Islamic extremism."

"It is clear from this failure that (the Pentagon) lacks (an) institutional culture ... sufficient to inform commanders and all levels of servicemembers how to identify radicalization to violent Islamist extremism and to distinguish this ideology from the peaceful practice of Islam," the report states.

The report claims that the Defense Department's alleged failure to identify the threat of Islamic extremism "explicitly and directly conflicts with (the Pentagon's) history of directly confronting white supremacism and other threatening activity among servicemembers."

It recommends that the Pentagon "revise its policies and training in order to confront the threat of Islamist extremism directly."

At the same time, the report says the FBI faces a series of "internal challenges -- which may include cultural barriers -- that can frustrate ... ongoing institutional reforms" designed in part to facilitate better intelligence sharing.

The report criticizes an FBI inquiry on Hasan for focusing "narrowly on whether (he) was engaged in terrorist activity -- as opposed to whether he was radicalizing ... and whether this radicalization might pose counterintelligence or other threats."

Lieberman and Collins argue that the failures leading up to the Fort Hood massacre should spur the National Security Council and the Homeland Security Council to "lead in the development of an integrated approach to law enforcement and intelligence domestically and a comprehensive national approach to encountering homegrown radicalization to violent Islamic extremism."

They warn that the current extremist threat "goes beyond the capabilities of the law enforcement, intelligence, and homeland security agencies."

The two senators objected to a number of redactions in the report, required by intelligence officials, calling them "unjustified." But "we have consented to them in order to produce this report in a timely manner," they asserted.

Addressing members of the media as the report was released, Lieberman declared that the Fort Hood massacre "should have been prevented" and that federal officials "had ample evidence of alleged killer Nidal Hasan's growing sympathies toward violent Islamist extremism in the years before the attack."

Lieberman called Hasan a "traitor," and urged a quick adoption of reforms to ensure "the next 'ticking time bomb' can be spotted early and defused before another deadly detonation."

A Pentagon spokesman responded by telling CNN the Defense Department "places a high priority on implementing recommendations that will strengthen policies, programs and procedures (that) contribute to the safety and health of our military forces."

"We will continue to cooperate with Congress while ensuring the integrity of the administration's own internal reviews as well as any ongoing criminal investigation or prosecution," Lt. Col. Robert Ditchey said.

The FBI released a statement saying it "agrees with much in the report and many of its recommendations."

The statement noted that an internal FBI review undertaken after the attack "identified several of the areas of concern outlined in the report and ... implemented changes to our systems and processes to address them."

"We will review each of the report's recommendations and adopt them as appropriate," the statement said.

Hasan's lawyer, John Galligan, said he has been trying for months to gain access to the information set out in the Lieberman-Collins report, claiming that he cannot prepare a defense without it.

A team of mental health experts delivered a report last week on Hasan's competency to stand trial and his state of mind at the time of the shooting. The findings of that report are secret, but Galligan has told CNN he doesn't think the report will stop the Army from moving forward with the case.