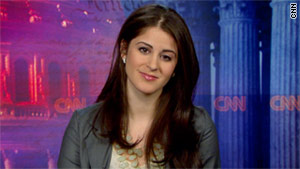 (CNN) -- Planned Parenthood defended a Virginia clinic and one of its employees Thursday against the latest attempt at an undercover video "sting" by conservative activists, telling reporters its clinic worker acted properly.

The anti-abortion group Live Action has sent operatives posing as a pimp and prostitute to Planned Parenthood clinics in several states, trying to persuade clinic workers to help them discreetly obtain abortions for minors supposedly in the sex trade. Planned Parenthood said the woman in the latest clip Live Action released "reacted professionally to a highly unusual person posing as a patient."

"After the encounter, the staff member immediately notified her supervisor, who subsequently notified members of Planned Parenthood's national security team, who are working with the FBI, which is investigating these visits," the organization said.

Live Action and its founder, California anti-abortion activist Lila Rose, have accused Planned Parenthood workers of covering up the sexual abuse of minors. The reproductive health organization vehemently denies the allegation -- but it fired a clinic worker in Perth Amboy, New Jersey, earlier this week after the woman was caught on video in another of Live Action's stings.

The New Jersey worker appears to advise the fake pimp and prostitute how to avoid mandatory reporting laws for abortion and how to find another provider in case an underage girl needs an abortion. Planned Parenthood spokesman Stuart Schear called the remarks "repugnant" and "completely inconsistent with Planned Parenthood's guidelines."

In a statement issued Thursday, Rose said her group shot the latest footage in a clinic in Richmond and argues it shows the counselor "coaching a pimp about how girls as young as 14-15 could circumvent parental consent laws for secret abortions." The clinic worker depicted in the video describes Virginia's law, including a provision that authorizes a judge to waive the parental notification provision.

Planned Parenthood says it reported the visits by the undercover "pimps" and "prostitutes" to federal authorities in January, while raising the possibility that they could have been hoaxes. It says the FBI is investigating the matter.

Planned Parenthood called on Live Action to release the raw footage of the visit. Rose said Live Action has shared the full footage with Virginia authorities and has asked state Attorney General Ken Cuccinelli -- an outspoken abortion opponent -- to investigate.