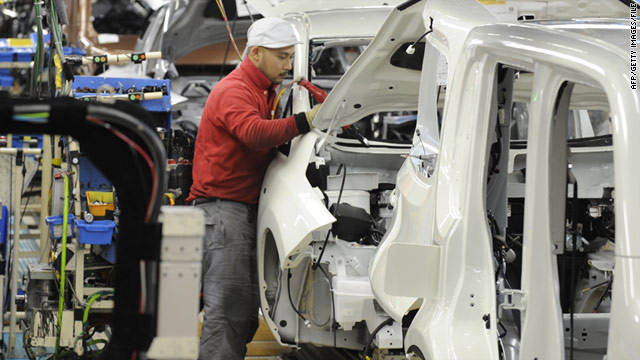 Nissan Motor workers install components into a Leaf electric vehicle on the assembly line of a plant in Yokosuka, Japan.
STORY HIGHLIGHTS

(CNN) -- President Barack Obama's goal of putting 1 million electric cars on U.S. roads by 2015 could run into a huge roadblock -- the American consumer.

According to a report released Wednesday by researchers at Indiana University, automakers are unlikely to manufacture enough cars to reach the president's goal because of a potential lack of buyer demand.

Nissan and General Motors, makers of the Leaf and Volt, respectively, already have the capacity to produce enough cars to meet the goal. Serious questions remain, however, about the level of desire among potential buyers worried about cost, ease of use and likely resale value.

"After the early adopters, what is going to motivate the mainstream people to buy the vehicles?" asked Gurminder Bedi, a retired Ford Motor Co. executive and one of the authors of the report.

Will you drive to the plug or the pump?

"Buying an electric vehicle just by itself, because it's better for gas mileage, will be a good factor. But that's not going to be sufficient."

"I'd say there will be more electric vehicles by 2015 than there would have been if that initiative hadn't been started," he said.

In 2008, there were nearly 57,000 electric cars on U.S. roads, according to an estimate by the U.S. Energy Information Administration. The administration has created a number of incentives for consumers to purchase electric cars, including a $7,500 tax credit to first-time buyers.