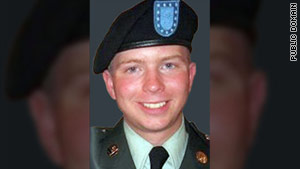 A friend of WikiLeaks suspect Army Pfc. Bradley Manning describes him as being "frazzled" behind bars.
STORY HIGHLIGHTS

Washington (CNN) -- After more than six months in maximum confinement in the U.S. Marine Corps brig in Quantico, Virginia, the prime suspect in the WikiLeaks case "seems frazzled," says one of the few people to visit Army Pfc. Bradley Manning.

He is "sometimes simply catatonic, unable to have conversations about anything really," said David House, who has visited his friend in the brig.

House said Manning is physically deteriorating. "He hasn't exercised in seven or eight months since he was confined," House said.

The Pentagon disputes the idea that Manning is being mistreated. Pentagon spokesman Geoff Morrell told reporters during a news conference last week that reports "that he is being mistreated, or somehow treated differently than others, in isolation, are just not accurate."

Manning is held in his cell 23 hours a day. He is allowed out of his cell to exercise, for an hour a day.

2010: Who is the intelligence leak suspect?
RELATED TOPICS

To those, like House, who say Manning should not be held in maximum security conditions, Morrell said it's not just for his own protection. "He's being held behind bars because he is deemed a threat, that he has been alleged to have committed a very serious crime that potentially undermines our nation's security, and therefore he needs to be confined during the course of a trial," Morrell said.

House said he does not discuss the WikiLeaks scandal with Manning because their conversations are monitored by Marines. But they have discussed the recent popular uprisings in Egypt and Tunisia.