This week's winter storm could be one for record books 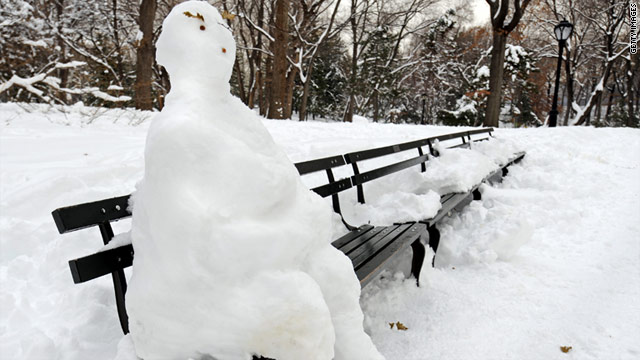 (CNN) -- Chicago was under a blizzard watch late Sunday as portions of the Midwest and Northeast braced for a major storm system that will bring bitter cold and a "long duration" of snow, according to forecasters.

Some of the coldest air of the season will plummet southward and combine with another storm developing over the southern Plains, according to CNN meteorologist Sean Morris.

An intense surface low will develop over north Texas and pull abundant warm, moist air from the Gulf of Mexico into the frigid Arctic air diving southward into the Plains. The result: blizzard conditions, heavy snow, ice storms and tornadoes.

This storm appears to be another one for the record books.

The National Weather Service said the "dangerous storm" will begin to affect Missouri and Illinois, which were under storm warnings, as early as Monday.

Snowfall, primarily on Tuesday, could be over 12 inches in parts of both states, the agency said.

CNN St. Louis affiliate KSDK indicated the storm could be "historic," saying it could rival a 1981 system that left 13.9 inches of snow in St. Louis and some areas with more than 2 feet.

Very heavy snow will fall from Oklahoma northeastward through Kansas, Missouri and Illinois. Snow accumulations here will be measured in feet, not in inches.

Blizzard or near-blizzard conditions are expected as far south as Oklahoma City on Tuesday. The National Weather Service forecast office in Norman, Oklahoma, warns that a "potentially dangerous winter situation" is developing with travel becoming extremely dangerous or impossible across the state by Tuesday morning.

Accumulations of 16 to 24 inches are possible in a narrow band from Illinois into Ohio, and perhaps through St. Louis, Chicago and Detroit, Hennen said Sunday, adding it was not yet possible to pinpoint the exact location.

This storm could be one of the top 10 biggest snowstorms ever in the Windy City with snowfall accumulations of 15 to 20 inches and isolated higher amounts possible, according to Morris. The biggest snowstorm in Chicago's history occurred from January 26-27, 1967, when 23 inches of snow fell.

According to the National Weather Service, snowstorms that drop more than 15 inches of snow occur once in about every 19 years. The last time this happened was in January 1999, when 21.6 inches of snow was recorded in Chicago.

The peak of the storm in the Midwest should be from Tuesday into Wednesday morning, Hennen said. Snow will affect Oklahoma City; Kansas City, Missouri; St. Louis; Chicago; and into Detroit. Other cities likely to be affected during the week include Milwaukee, Cleveland, Boston and the New York cities of Buffalo, Syracuse and Albany.

Punxsutawney Phil, of Groundhog Day fame, may be more interested in his exposed fur than his spring forecast when the system reaches western Pennsylvania.

Severe thunderstorms will likely develop along a trailing cold front from a main low-pressure area. There could be a significant potential for tornadoes in Arkansas, Louisiana, Mississippi, Tennessee and Alabama.

Where the warm air overrides the cold Arctic air, rain will fall into subfreezing temperatures at the surface and coat trees, power lines and roads in ice from Missouri to southern Illinois and eastward into central Indiana, Morris said. Ice accumulations of up to three-quarters of an inch will be possible, which will likely combine with gusty winds, which could cause tree branches to fall on power lines.

This will also be some of the coldest air of the season, with temperatures expected to drop well below zero in parts of the Texas Panhandle and western Oklahoma by Wednesday. Temperatures across the central and southern high Plains will be almost 50 degrees below normal in some areas. Low temperatures on Wednesday morning could be in the single digits as far south as north Texas.

Strong winds will combine with the cold temperatures to create extremely dangerous wind chills of 20 to 35 below zero across the southern Plains.