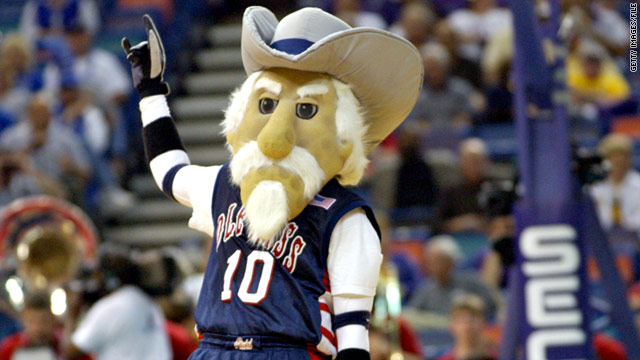 The University of Mississippi retired Colonel Reb as its mascot in 2003.
STORY HIGHLIGHTS

(CNN) -- A state legislator apparently misses Colonel Reb so much, he's pushing a bill to bring the former University of Mississippi mascot back. He also wants the college band to play "Dixie" at games -- even on the road.

"The University of Mississippi shall bear the nickname 'Ole Miss Rebels' and its mascot shall be 'Colonel Rebel,'" states House Bill 1106.

"The University of Mississippi's marching band ... shall play the song 'Dixie' before, during and after home and away football games and basketball games at which the band, or a portion of the band, is present," the legislation states.

Under the bill, which is authored by Democratic state Rep. Mark DuVall of Mantachie, the band would be required to play "From Dixie with Love" only once -- during halftime.

The university, which in recent years has sought to dim the Old South imagery associated with the institution, retired the white-haired and moustachioed mascot in 2003.

Ole Miss, a Southeastern Conference member, went without a mascot until October 2010, when students adopted Rebel Black Bear in a campuswide vote.

Since then, however, a vocal minority of students and university boosters have pleaded for the return of the colonel.