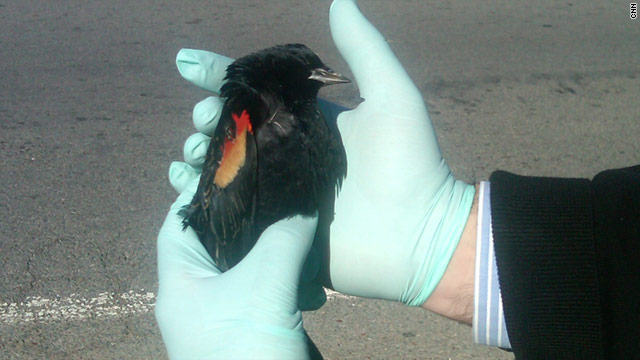 A state panel found that thousands of birds that fell from the Arkansas sky on New Year Eve died from blunt force trauma.
STORY HIGHLIGHTS

(CNN) -- The mass deaths of thousands of red-winged blackbirds in Arkansas was caused by "blunt force trauma," according to a new report by the Arkansas Game and Fish Commission.

Laboratory tests were conducted on 13 of the birds that were part of the group that flew into buildings and died in a neighborhood in Beebe, Arkansas, 40 miles northeast of Little Rock.

"The tests ruled out bacteria, viruses, heavy metals, pesticides and avicides (chemicals used to kill birds) as causes of death," the commission said in a statement.

These results confirmed preliminary tests that were conducted after the incident.

The tests revealed hemorrhaging "consistent with blunt trauma," according to the report released Wednesday. "In most instances, such traumatic injuries in wild birds are due to flying into stationary objects such as trees, houses, windows, power lines, towers, etc."

Why did so many birds die?

Officials say as many as 5,000 birds died in the incident.

This incident came several days before another mass death of animals. In that incident, 450 miles south of Beebe, some 500 red-winged blackbirds, starlings and sparrows were found dead. Also that same week, about 50 dead birds were found on a street in Sweden.