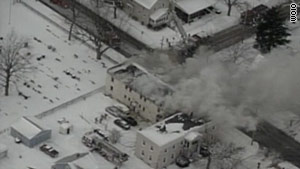 Check out the local report at CNN affiliate WOIO-TV in Cleveland.

(CNN) -- At least nine homes in the Ohio village of Fairport Harbor caught fire Monday after an increase in gas line pressure, the mayor's office said.

Authorities scrambled to shut off gas service amid reports of gas fumes in the air.

Lake County Sheriff Daniel Dunlap said that as of about 8:40 a.m., gas service had been shut off and all the fires were believed to be out.

Police initially had said they would attempt to evacuate up to 3,000 people in the village. However, Major Frank Sarosy called off the evacuation, saying it would be too chaotic to get residents out of the village through only three exits. Residents were asked to turn off their gas from the outside and remain in their homes, the statement said.

Gas began flowing at a higher rate than normal because of a problem in the pressure line, and that caused the fires, the mayor's office said in a written statement. There were no immediate reports of injuries.

All 17 of the county's fire departments were called out. The initial call came in about 7 a.m. ET, Dunlap said.

Fairport Harbor is about 30 miles east of Cleveland on the shores of Lake Erie.

CNN's Karan Olson and Julia Talanova contributed to this report.