By Drew Jubera, Special to CNN 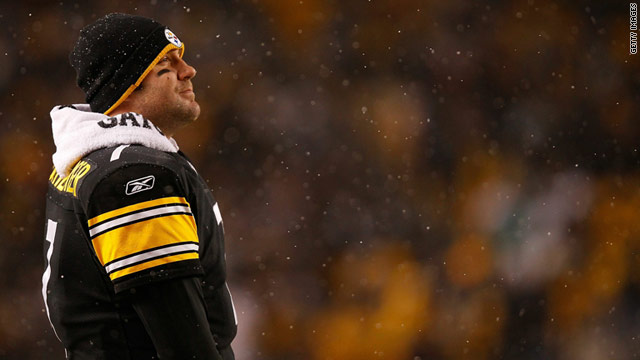 Ben Roethlisberger may have the Steelers on the verge of another Super Bowl, but the fallout from off-field problems linger.
STORY HIGHLIGHTS

(CNN) -- He's been called a rapist, a sexual predator, a serial idiot, and a bore.

The NFL suspended him. Eminem rapped about him ("Get as rowdy as Roethlisberger in a bathroom stall"). Even his own team's former Hall of Fame quarterback publicly dissed him.

"I'm learning," Terry Bradshaw said, "not to like him."

So of all the damning things said about Pittsburgh Steelers quarterback Ben Roethlisberger since he was accused last March of sexually assaulting a college coed in a small-town Georgia bar (charges were never filed), there's little that cuts deeper in Pittsburgh than the one word folks there apply only to the most recidivist lunkheads.

"Jagoff," says Stan Savran, a Pittsburgh sports radio and TV host. "A lot of people thought he was a jagoff. There were stories that he stiffed waiters and waitresses, that he'd big-time people, that he was condescending or rude to fans.

"That stuff might play in New York or L.A. or Miami, but it does not play well here," Savran adds. "People would say, 'He's not a Pittsburgh guy.'"

Roethlisberger's season-long road to redemption reaches a potentially critical juncture this Sunday, when the Steelers host the New York Jets in the AFC championship game.

At stake: the team's shot at another Super Bowl, which they've already won a record six times -- and Roethlisberger's own legacy.

If the Steelers win, the 28-year-old Roethlisberger would join only a handful of other quarterbacks who've started in at least three Super Bowls. And if he goes on to win his third Super Bowl title, he'd join even more rarefied company -- Hall of Famers Joe Montana, Troy Aikman and Bradshaw, and shoo-in Hall of Famer Tom Brady.

"He wins another Super Bowl, and you'd have to start looking at him as one of the best clutch quarterbacks in NFL history," Williams says.

As for the off-field problems that nearly derailed his career before the season, Williams adds, "Winning cures a lot of things. A lot of sins are forgiven."

Just last March, it wasn't certain whether Roethlisberger would even still be a Steeler. Tawdry headlines bloomed from an unlikely spot: a college bar in Milledgeville, Georgia, about 80 miles southeast of Atlanta.

The 6-feet-5, 241-pound "Big Ben" was bar-hopping there with a beefy entourage, celebrating his birthday. He hooked up with some sorority sisters in a club's VIP room. Shots were downed.

The 20-year-old accuser said Roethlisberger followed her down a narrow hallway and exposed himself. When she ducked into the cramped bathroom, she said, Roethlisberger forced his way inside.

"I still said no, this is not OK, and then he had sex with me," she told police. "He said it was OK. He then left without saying anything."

After a month-long investigation, Roethlisberger was not charged. Fred Bright, the district attorney, cited a lack of physical evidence and varying accounts from the accuser, whose own lawyers asked Bright to drop the case.

"We do not prosecute morals," Bright said. "We prosecute crimes."

Yet morals are exactly the subject of a personal crusade for NFL commissioner Roger Goodell, who has beefed up enforcement of the league's personal conduct policy. The most flagrant example was Michael Vick's suspension after being convicted for his involvement in a dog-fighting ring.

But when Goodell suspended Roethlisberger for six games this season (later reduced to four), he became the first player exiled by the commissioner under the conduct policy who had not been arrested or charged with a crime.

"There is nothing about your conduct in Milledgeville that can remotely be described as admirable, responsible, or consistent with either the values of the league or the expectations of our fans," he told the Pro Bowl quarterback.

The Steelers are one of the league's few mom-and-pop franchises -- Green Bay is another -- whose ties with the city often seem more familial than corporate.

Raised above his father's North Side saloon, Art Sr. paid the NFL's franchise entrance fee in 1933 with money he won betting on long-shots at New York's Saratoga Race Course. He then funded the franchise for years with an epic killing he made during a trip to the track in 1936. With winnings estimated at between $200,000 and $358,000, in Depression-era dollars, he had to haul it all back home in a Brink's truck.

For much of the elder Rooney's tenure, the Steelers were lovable losers. But just as Pittsburgh's iconic steel industry vaporized in the 1970s, the Steelers morphed into a decade-long powerhouse, winning four Super Bowls in six years, as well as a visceral loyalty among fans around the country (rivals Baltimore, Cleveland and Dallas excluded).

"Pittsburghers were looking for a story that encapsulates who they are, and the Steelers have become that story," says Maggie Patterson, co-author of "Rooney: A Sporting Life." "People all over the world have latched onto that sense of blue-collar strength, and proving yourself through actions rather than rhetoric."

It was with this prideful, close-knit culture that the sometimes ego-flaunting Roethlisberger, with his $102 million contract, found himself in conflict.

"A lot of people look what he was alleged to have done as a slap in the face of the Rooneys," Savran says. "They felt like he betrayed the Rooneys, and in this town you don't do that."

In 2006, against his coach's orders, he rode his motorcycle without a helmet, then wrecked it and wound up with a broken jaw and a concussion.

In 2009, a woman who says he raped her the year before at a Lake Tahoe hotel and casino filed a civil suit against him and the casino. Never criminally charged, Roethlisberger denied the allegations and claimed counter damages in the civil lawsuit. A dispute over where the case should be tried is now before the Nevada Supreme Court.

After the Milledgeville incident, word spread that Roethlisberger could be traded -- and many fans demanded it. Roethlisberger's No. 7 jersey, the league's 11th best-selling uniform top in 2009, dropped out of the top 20. "Big Ben" became a comedic punchline; one "South Park" episode featured him in a rehab class for sex addicts, with Bill Clinton and David Letterman.

But the Steelers treated him more like a wayward son than a pariah -- mindful, of course, that a franchise quarterback like Roethlisberger doesn't come along often. Art Rooney II said in a statement that he'd talked to Roethlisberger about "making sure this never happens again."

By all accounts, Roethlisberger has taken the talk to heart. He hasn't been spotted out on the town with his mobbed-up-looking posse, or had his drunken picture taken, as he once did, while sporting a T-shirt that read "Drink Like a Champion."

"I got caught up being Big Ben the whole time," he told one local TV station. "Superman kept taking over Clark Kent, and you just never saw who Ben Roethlisberger was anymore. At the time, I didn't see it. I was gaining everything but losing a lot of who I was raised to be."

Many fans remain skeptical. When it was reported recently that he'd become engaged to a local woman, some saw it as an image-burnishing stunt. One blogger sniffed, "Did he propose in a bathroom?"

"There's a lot of skepticism about everything he does," Patterson says. "But the Rooneys are a strongly Catholic family. They'll take someone at their word, until proven otherwise."

Much could depend on Sunday's outcome -- and if the Steelers win, the outcome of the game after that. How the still-young Roethlisberger handles even more accolades, or the criticism sure to be heaped on him if the Steelers lose, could set the tone for the rest of his career.

"Win or lose, it's going to be an interesting off-season," says Mike Logan, a retired Steeler who played with Roethlisberger on the 2006 Super Bowl champion team. "He's got another opportunity to prove himself. I think he gets it now."

But, Logan adds, "If he doesn't know how to handle it, it could get ugly."