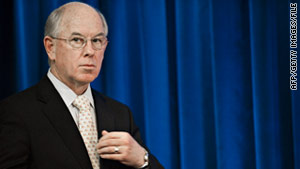 Washington (CNN) -- The State Department is revoking the visas of a number of Haitian government officials believed to be connected with violence or corruption during the country's disputed first round of presidential elections in November.

The elections were marred by charges of massive fraud.

"We have taken action against a number of Haitian citizens and this is something that we will continue to evaluate," Crowley said at a news conference Friday. "Our focus at the present time is ensuring a free, fair and credible election process in Haiti."

"We have taken this action," he added, "when ... there is information that leads us to believe that the visa holder is inadmissible to the United States or otherwise ineligible for a visa."

"We obviously continue to be in touch with the government of Haiti," Crowley told reporters. "We want to see the government of Haiti embrace the recommendations of the (Organization of American States) verification mission report. We want to see security and stability sustained in Haiti; we want to see the election results reflect the will of the Haitian people. And to the extent that there are individuals who are connected with episodes of violence or corruption, we will not hesitate to take appropriate action."