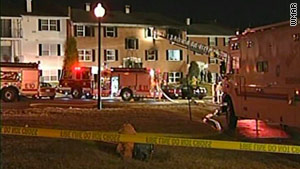 One firefighter died Wednesday in a four-alarm apartment fire in the Parkville area of Baltimore County, Maryland.
STORY HIGHLIGHTS

Firefighters had rescued a woman and were searching for more possible survivors on the second and third floors when a "flashover" occurred, according to the chief.

A flashover is a powerful ignition of combustible materials.

Falkenhan's partner managed to escape through a window, officials said.

"It's a tragedy this man died in the line of duty saving lives," County Executive Kevin Kamenetz told reporters.

Falkenhan had formerly worked with the Baltimore County department and left to work with the U.S. Secret Service, Hohman said.

Two other people were injured at the Towson Crossing apartment complex, according to CNN affiliate WBAL.

Investigators were on the scene, but a kitchen fire was reported in the basement, Hohman said.

"We have an inherently dangerous profession," he said.