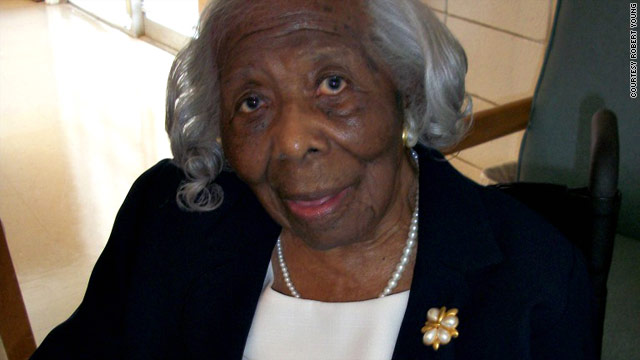 (CNN) -- Mississippi Winn didn't get caught up in the amazing statistics that accompanied someone her age.

Only 1 in 5 million people in the industrialized world live to be 110. About 60 people that age live in the United States, with another 300 or so scattered around the globe. Nine of 10 are women.

Winn was believed to be the oldest living African-American when she died Friday afternoon in Shreveport, Louisiana, at 113.

Investigator Milton Carroll of the Caddo Parish Coroner's Office said he was not permitted to disclose a cause of death, but a relative said Winn -- who was nicknamed "Sweetie" -- had been in declining health since last autumn.

"She looked to be in very good shape," he said Saturday. "It was a surprise she went downhill so fast."

Young believes Winn's parents were born into slavery. Her father was born in 1844 and her mother in 1860.

But Winn "never discussed it," said her great-niece Mary C. Hollins of Shreveport. "She would say, 'I don't know about that.'"

Winn, who did not marry and lived independently until 103, appears to have lived a life that made her especially well-qualified for the elite club of supercentenarians -- those who live to be 110 or older.

"She had always been kind to others," Hollins said on Saturday. "She was always respectful."

"We have declared March 31 as Ms. Mississippi Winn Day since her 110th birthday," he wrote in an e-mail.

"Our thoughts and prayers are with Miss Winn's family, relatives, her beloved Pastor Clarence Hicks and her church family and friends who all loved and cherished her," he said.

The secret to living to and past 110, besides not having an unhealthy weight, said Young, is a positive attitude and emotional and physical stability. Most supercentenarians take little medication during their lives, he said.

"They do things in moderation," he said. "They don't get upset."

Most were still walking at age 105, he added.

Born in Bossier Parish, Louisiana, on March 31, 1897, Winn moved with her family to Shreveport after her father died in 1908.

She worked as a domestic, cooking and helping families raise children.

She worked in Kansas City for a time and lived in Seattle, Washington, from 1957 to 1975, helping to raise three boys, before returning to Louisiana. Winn had a child who died at age 2, Hollins said.

Before she moved to the nursing home, Winn lived on her own, doing her own laundry and walking around a track for exercise. She never learned to drive. Instead, she got rides or took a bus to the grocery store.

She liked bingo and sewing and loved to cook vegetables and stewed chicken. Said Hollins: "She didn't make much over modern things."

Winn was clear about what she liked.

"She was a disciplinarian," said Hollins. Right or wrong, it was her way."

A member of Avenue Baptist Church, Winn received visits from church members and was able to attend a service on August 29. The chuch will hold her funeral next Saturday.

She outlived many of her church friends.

"When each one passed I could see part of her leaving with them," said Hollins, whose grandmother was Winn's sister.

In time, Winn came to enjoy the attention paid to her age.

But she remained even-keeled, said Hollins, recalling what her great-aunt would say.

"I'm just going to stay here until he's ready for me."

The oldest known African-American is now Mamie Rearden of Edgefield, South Carolina, who is 112.

The world's oldest known living person is Eunice Sanborn, 114, of Jacksonville, Texas, according to Young.