Washington to relax restrictions on remittances, travel to Cuba 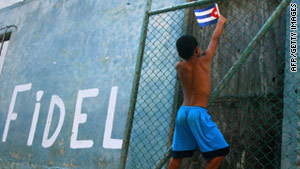 "Today, President Obama has directed the secretaries of State, Treasury, and Homeland Security to take a series of steps to continue efforts to reach out to the Cuban people in support of their desire to freely determine their country's future," the White House said in a written statement.

The changes concern travel, non-family remittances and U.S. airports supporting licensed charter flights to and from Cuba. "These measures will increase people-to-people contact; support civil society in Cuba; enhance the free flow of information to, from, and among the Cuban people; and help promote their independence from Cuban authorities," it said.

"The president believes these actions, combined with the continuation of the embargo, are important steps in reaching the widely shared goal of a Cuba that respects the basic rights of all its citizens."

And licensing of educational exchanges not involving academic study pursuant to a degree program will be restored, it said.

In addition, specifically licensed academic institutions will be able to sponsor academic seminars, conferences, and workshops related to Cuba and allow faculty, staff, and students to attend.

Licensing also will be allowed for a greater scope of journalistic activities, it said.

And any U.S. person will be able to send up to $500 every three months to non-family members in Cuba "subject to the limitation that they cannot be provided to senior Cuban government officials or senior members of the Cuban Communist Party."

Obama also directed that any U.S. international airport can apply to service licensed charters "provided such airports have adequate customs and immigration capabilities and a licensed travel service provider has expressed an interest in providing service to and from Cuba from that airport."

"These changes will not help better human rights nor will they help Cubans free themselves of the tyranny that surrounds them," she said in a written statement. The changes "will just bring economic benefits to the Cuban regime," she said.

"That's really absurd," responded Wayne Smith, former chief of the U.S. Interests Section in Havana, in a telephone interview with CNN from Washington, where he directs the Center for International Policy's Cuba Program.

He described the changes as "terrific," but said the administration should go further by ending the half-century-old trade embargo.

"It really hasn't done the slightest bit of good," he said. "Our whole policy has to be called a failure. It has not forced the Cubans to change. The best thing we can do is to have greater contact with the Cubans, a greater flow of people and ideas and so forth. You can have more impact that way than by trying to wall everybody off."

Smith noted that his group this week announced plans to hold a conference next week calling on the administration to lift the restrictions on academic travel and people-to-people travel, and a series of other steps. "So, we'll take full credit," he said, laughing. "We called on them to do it and, by golly, they have."

He added, "I wish they'd done it months ago, but better late than never."

CNN's Arthur Brice and Tom Watkins contributed to this story