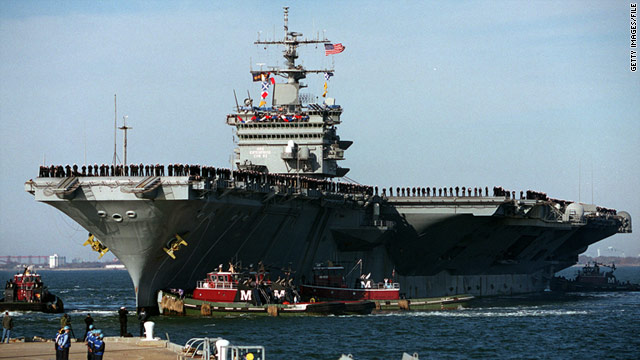 The Enterprise's next mission is expected to be to the Mediterranean and Arabian seas for at least six months.
STORY HIGHLIGHTS
RELATED TOPICS

Washington (CNN) -- A former commanding officer of the USS Enterprise has had his scheduled retirement delayed pending the Navy investigation into inappropriate videos made on board the ship in 2006 and 2007, a Navy spokesman said Thursday.

"This is a prudent and necessary step as the investigation continues," said Rear Adm. Dennis Moynihan, chief of Navy information.

Rear Adm. Lawrence Rice had been scheduled to retire on February 1. He was the senior officer on board Enterprise during at least some of the time Capt. Owens Honors was the number two officer. Honors was responsible for the raunchy videos, officials have said.

Honors had become the commanding officer of the Enterprise, but was relieved of duty this month when the videos came to light inside the Navy.

After serving on the Enterprise, Rice moved to Joint Forces Command, where he was until recently being reassigned to the Navy Fleet Forces Command in Norfolk, Virginia, pending conclusion of the investigation.

Moynihan emphasized the delay in Rice's retirement in no way suggests any outcome of the investigation.

Results of the Navy investigation into the video will be given to the commander of the Navy fleet by January 24 for consideration of what further action, if any, needs to be taken, officials said.

Meanwhile, the Enterprise, the Big E to her crew, embarked from Norfolk Naval Station on Thursday for another mission to a warzone under Capt. Dee Mewbourne, who took command after Honors was removed.

"The crew is ready," Mewbourne told reporters just before boarding the ship for a mission that's expected to take its 5,000 sailors and Marines to the Mediterranean and Arabian seas for at least six months.

"When I came aboard this ship last week I told them (the crew) that the circumstances that brought me here were very unfortunate," Mewbourne said. "But we have got to look to the future and the crew acknowledged that with only about 10 days before deployment, we had to focus on what we have to do."

Mewbourne said Honors had contacted him via e-mail offering to help with the sudden command transition so close to deployment.

Hundreds of family members braved the cold to say goodbye to their loved ones.

None of the sailors or their family members that CNN spoke to Thursday said the video scandal would affect their mission.

"It's a non-factor," Ginny Watson said after saying goodbye to her youngest son, a crew member on the Enterprise.

Culinary Specialist 2nd Class Melissa Williams said it is time to move on.

"We joined the military to serve our country and that's what we do. We press forward," Williams said.

The Enterprise is the oldest active warship in the U.S. Navy. It began service in 1962 during the Cuban Missile Crisis and has played a role in every major military action since then. The ship is nearing the end of its career, but this mission is not expected to be its last.