Joint Chiefs chair warns of disconnect between military and civilians 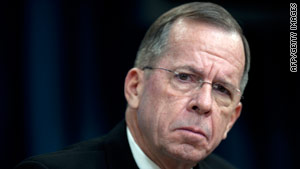 Washington (CNN) -- The nation's top military man warned Monday of a potentially dangerous gulf between the civilian world and men and women in uniform.

"To the degree we are out of touch I believe it is a very dangerous force," Mullen said in a speech to a conference on military professionalism at the National Defense University in Washington.

The disconnect between the civilian and military worlds is partially because only a fraction of the population serves and those in uniform increasingly hail from fewer, primarily rural, areas of the country, Mullen said.

Fewer Americans have personal contact with members of the military, he said.

"They know that we are in two wars, we've sacrificed a lot, lost a lot of people, over 5,500 people. They are very supportive of that," Mullen said. "They care a lot about great young men and women that they know. Many of them don't know that many, and it just speaks to the disconnect."

The comments echo that of Defense Secretary Robert Gates who, in a September speech, told a college audience the volunteer forces carry an unfair burden in fighting the protracted wars in Iraq and Afghanistan.

"Whatever their fond sentiments for men and women in uniform, for most Americans the wars remain an abstraction, a distant and unpleasant series of news items that do not affect them personally," Gates said at Duke University. "Even 9/11, in the absence of a draft, for a growing number of Americans, service in the military, no matter how laudable, has become something for other people to do."

Mullen was one of the movers behind the day-long conference at the National Defense University. He used the span of his own career to show how public support for the military had risen dramatically from the lows of the Vietnam era.

"American people are extraordinarily supportive of our men and women ... there is a sea of good will," he said. The military must work to build and sustain trust or risk negative consequences, he said.