Reporter's Notebook: The 'Band of Brothers' lives on 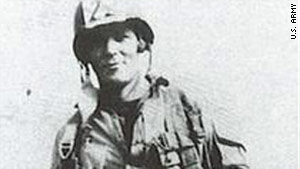 Maj. Richard "Dick" Winters was part of the "Band of Brothers," whose spirit lives on today.
STORY HIGHLIGHTS
RELATED TOPICS

Washington (CNN) -- The passing of Maj. Richard "Dick" Winters has reduced the ranks of the legendary "band of brothers," the men of Easy Company, the 506th Parachute Infantry Regiment, 101st Airborne Division.

But their valor lives on in today's troops, especially the young men and women of the Army's "Screaming Eagles" 101st Airborne Division.

As a reporter who has regularly traveled through Afghanistan with them, let me assure you at some moment, suddenly, Easy Company is there with you in that war zone, just as earlier members of E Company were there for each other and for their country in World War II.

It was a blustery, wind-blown morning in November 2008 in Afghanistan. I was on Forward Operating Base Shank with a small unit of the 101st when suddenly the ghosts of Normandy, Operation Market Garden, and Bastogne were just off in the mists. Another war, another time, another generation -- but they were there. Young men, leaning casually, rifle at their knees, smoking cigarettes, waiting for the orders to move out.

A loudspeaker announcement had just come on that the mortar range was "hot" with an early morning training session. "Outgoing mortars in five minutes! Currahee!"

It was the legendary call "Currahee" that jolted me. More than half a century earlier the young men of the 101st had run up and down Mount Currahee in Georgia training for battle in World War II. Currahee came to symbolize the grueling regimen of training and the growing bond of kinship that brought the men together.

They would go on to become the stuff of legend indeed, reminding millions through a book and the television series "Band of Brothers" that men, young men, fight in wars not for glory or the goals of politicians, or even for themselves, but rather for the buddy on the right and the buddy on the left. The fear is not of death, the fear is the potential awfulness of letting down your brothers, of letting down the team.

"Currahee" was an Indian word meaning "stands alone," a phrase that later in part became the regiment's motto: "We stand alone together."

As I traveled with the 101st in Afghanistan, I would hear the phase "Currahee" everywhere, a honored reminder of those who had gone before.

Throughout the war zone, the brotherhood continues everywhere, but perhaps nowhere more spine-tingling than with today's young troops of the 101st, who are so aware of honor and valor of their World War II predecessors

Last summer I traveled with some young wounded troops out of the war zone back toward home, on a C-17 medical evacuation flight. Three of them were young men of the 101st. I found them on stretchers on their way back to Fort Campbell on the Kentucky-Tennessee border. They had been brought down together by a roadside bomb, and they were coming home together, refusing to be separated.

Pvt. Mike Garcia ,21, leaned over painfully on his stretcher and whispered, "Ma'am that's what makes it personal, because we go over there, we are such a small group to begin with, and we see pretty much nobody else for the year we are over there and we just bond, a lot of bonding pretty much, especially when you get hit.

"I can tell you one thing, I am happy with them, I am grateful for them," he said pointing to his two buddies on nearby stretchers.

I am not sure how many of today's young troops of the 101st know the origin of the phrase "band of brothers," from Shakespeare's Henry V, with the lines: "We few, we happy few, we band of brothers. For today he that sheds his blood with me shall be my brother."

But the brotherhood does not dim. Just a few weeks ago I was back with the 101st on another mountaintop in Afghanistan, talking to some soldiers who just two days earlier had been in a brutal firefight with the Taliban. One of the young soldiers had stepped in front of Taliban gunfire to save his buddy who had been turned away, shooting in another direction against other insurgents.

The two were still fairly shaken by what had happened. Suddenly they put their arms around each other, and one said quietly, "He's my brother."