Northeast braces for another snowy weekend 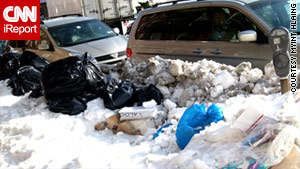 Snow and trash piled up for days after the Christmas weekend snowstorm in New York.
STORY HIGHLIGHTS

A large complex winter system stretched across the northeast Friday, making for messy commutes in cities like Philadelphia. The good news? The storm was moving fast and wasn't predicted to paralyze the area as the massive storm did less than two weeks ago.

Several major airlines -- including American, United/Continental, U.S. Airways and Delta -- announced to their customers that they could voluntarily reschedule flights to and from snow-affected areas without penalty.

Southwest expanded the option for passengers flying in and out of not just New York and Pennsylvania airports but also to Washington Dulles and Baltimore.

Forecasters project between 2 and 4 inches of snow across the greater New York City area, with heavier amounts of snow expected over eastern sections of Long Island. Snow was predicted later in the weekend for Atlanta and areas even further south.

Emergency workers, criticized for their slow response to the blizzard two weeks ago, will now get another chance to prove themselves. Mayor Michael Bloomberg said New York has already instituted a series of changes in the aftermath of the Christmas weekend storm.

The heavy snow over the Christmas weekend hampered morning commuters, delayed first responders and even prevented aircraft service personnel from reaching airports where 29 international flights were stuck on the tarmac for more than three hours, officials said.

Following sharp criticism of the city's slow response, John Doherty, the chief of the sanitation department, has made management and personnel shake-ups in Brooklyn.

An investigation is underway into whether sanitation workers intentionally delayed clean-up efforts over frustrations of demotions and citywide budget cuts.

Bloomberg also announced that some city snow plows will be fitted with global positioning systems in a pilot program meant to better track sanitation vehicles as officials brace for a winter storm.

"It gives us the ability to check on the location and progress of our snow plows," Bloomberg told reporters, saying that the devices will be added to some trucks in New York's Brooklyn and Queens boroughs where heavy snowfall last month left many residents snowbound.

The city will also deploy scout teams to transmit video images of neighborhoods back to City Hall during clean-up efforts, the mayor said.