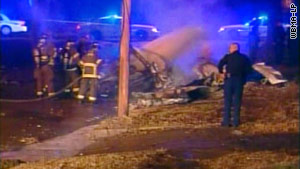 The plane was approaching the runway of the Birmingham airport when it crashed Wednesday.
STORY HIGHLIGHTS
RELATED TOPICS

(CNN) -- Officials with the National Transportation Safety Board are expected to arrive Thursday morning to investigate a small plane crash that killed one person in Birmingham, Alabama.

The Beech BE-58 was approaching the runway of the Birmingham-Shuttlesworth International Airport when it crashed Wednesday, said the Federal Aviation Administration. The cause of the crash is unknown.

"All I know is my friend right here told me to look up, and it was a plane in the sky, fire coming out of the back of it," Kairee King told CNN affiliate WBMA.

King was on his porch when the plane crashed in a neighborhood, about 50 feet from the nearest house, the affiliate reported.