Ambassador to Libya may be replaced over leaked cables, official says 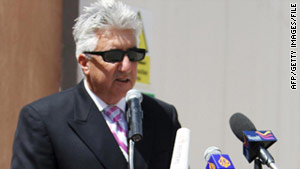 Gene Cretz may not be the United States ambassador to Libya much longer, officials say.
STORY HIGHLIGHTS

Washington (CNN) -- The United States might replace its ambassador to Libya after WikiLeaks published his colorful cables to Washington about the eccentricities of Libyan leader Moammar Gadhafi, complicating relations with the notoriously sensitive regime.

Ambassador Gene Cretz, a career diplomat named to the post in 2008, is back in Washington for consultations with the State Department.

A senior U.S. official, speaking on background because of the diplomatic sensitivity of the issue, said, "One of the issues that we are evaluating is his ability to serve our interests as ambassador in light of what's happened."

The cables refer to Gadhafi as "mercurial and eccentric" and describe a "voluptuous" blonde Ukrainian as his nurse and companion.

"Have the Libyans expressed concerns to us about WikiLeaks? Yes," the official said. "Our relationship with Libya is complex. It was complex before WikiLeaks, and it is complex after WikiLeaks, perhaps more complex."

Publicly, the State Department says there has been no request from Libya to remove Cretz, and P.J. Crowley, State Department spokesman, insisted in his daily briefing that "he is still our ambassador to Libya."

Crowley, however, added, "One of the issues we will be discussing with Ambassador Cretz is his return to Libya."

The fallout from WikiLeaks continues to roil U.S. diplomatic relations and, according to the senior official speaking on background, Libya is not the only country to be affected.

"This is not unique to Libya," he said. "If you look globally, the relationship between our ambassadors and a number of governments has been affected by disclosure of these cables. On an ongoing basis we are evaluating whether any changes will have to be made."

"We are not going to change who we are or what we do," the official said, adding: "We are concerned about the candor in our ongoing, day-to-day dialogue with governments. Some governments have told us they are going to be less candid in the future and that is something that the secretary has made clear we will just have to work through over time."