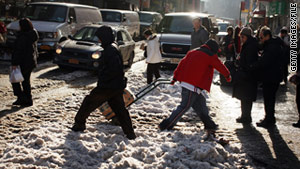 New York (CNN) -- Officials in New York said Tuesday they are looking into what happened to cleanup efforts during last week's monster blizzard.

The New York City Department of Sanitation has drawn sharp criticism since the storm that blanketed much of the Northeast. Workers there have been accused of deliberately slowing down the response in retaliation for the city's belt-tightening measures.

New York City Councilman Dan Halloran said three sanitation workers and two Department of Transportation supervisors came to his office saying their bosses ordered the slowdown, telling workers that "the mayor will see how much he needs us" and "there will be plenty of overtime."

"This office is reviewing information provided to it by City Councilman Dan Halloran, among others, with respect to last week's snowstorm and the City's response thereto. In addition, we have been in contact with the City's Department of Investigation," Queens District Attorney Richard Brown said in a statement.

He added that his office has not yet reached a decision as to whether a formal investigation is warranted.

Sanitation Commissioner John Doherty has said he had not seen evidence of a worker protest. Similarly, the head of New York's sanitation workers union, Harry Nespoli, has said he was not aware of any slowdown and doubted there was a protest by workers.

Department of Investigation Commissioner Rose Gill Hearn said her office was looking into reports of wrongdoing and asked anyone with information to step forward.

"DOI is continuing its multi-borough investigation into whether there is any evidence of intentional acts of commission or omission related to the snow clean up and has been conducting its investigation since last week," the department said in a statement Tuesday.

"As we always do, we will provide our factual findings when we have concluded. In addition, we have heard from various prosecutors' offices and if we find a violation of state or federal law will work closely with the appropriate agency," it continued.

Authorities in Brooklyn also said they would review what happened with respect to snow removal last week.

Robert Nardoza, spokesman for the U.S. Attorney's Office Eastern District of New York, declined to say if officials there would pursue a criminal investigation related to the response.