Hepatitis A warning issued after Christmas communion on Long Island 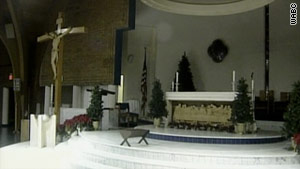 Individuals who received communion at two Christmas Masses at Our Lady of Lourdes Church may be at risk.
STORY HIGHLIGHTS
RELATED TOPICS

New York (CNN) -- Hundreds of people might have been exposed to hepatitis A while receiving communion on Christmas Day, Long Island officials said Monday.

Individuals might be at risk if they received communion during the 10:30 am and noon Masses, according to a statement from the county health department.

"We know that there's a potential that (exposure) could have happened," she said. "We think the risk is relatively low."

At least one member of the clergy involved in the communion process was infected with the disease, Laurain said.

There have been no additional reports of illness.

Some 1,300 people were in attendance between the two church services, she added.

Symptoms of the disease include the onset of fever, fatigue, poor appetite, nausea, stomach pain, dark-colored urine and jaundice, according the statement. The disease is rarely fatal and most people recover within a few weeks without complications, it said.

Individuals exposed to the disease should receive vaccination within two weeks of exposure, the statement said.