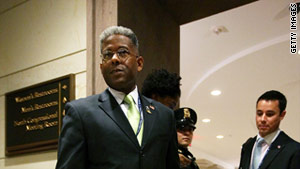 Rep.-elect Allen West disagrees with the new House majority leader about how lawmakers should schedule their time.
STORY HIGHLIGHTS

Washington (CNN) -- Last year's midterm elections swept some tea partiers into Congress, and some of the new lawmakers are not wasting time making their voices heard.

The issue is over how much time has been scheduled for lawmakers to be in Washington compared to their home districts.

Cantor has scheduled ample time for congressmen to spend time back home, but West disagrees, calling the schedule "disconcerting."

"If they believe that the more time that we're spending up here working toward what's best for the American people is a bad thing, then, you know, what's our purpose for being here?" West said on "Fox News Sunday."

It is more important for lawmakers to spend more time in Washington, he argued.

West said he felt compelled to bring the issue up even though this is his first year in Congress.