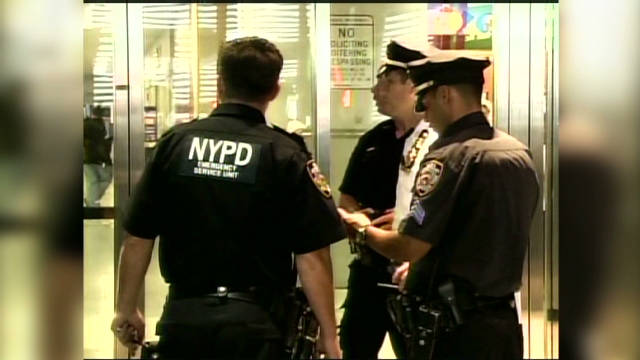 What happened on the flights has no nexus to terrorism, a federal law enforcement official said.

Out of an abundance of caution, authorities sent two F-16 jets to shadow the flight until it landed safely at JFK at approximately 4:10 p.m. ET, Soule said, adding law enforcement will interview passengers. J. Peter Donald of the the FBI in New York said the incident involved three passengers.

Tim Smith, a spokesman for American, told CNN that a passenger alerted the crew to a perceived security concern. The captain investigated and elected not to declare a security threat and no one on board requested military or law enforcement assistance, Smith said.

Crew members noticed two men acting suspiciously. One spent about 20 minutes in a bathroom in the back of the plane while the other waited in a forward galley before using the restroom, also for 20 minutes, said Frontier spokesman Peter Kowalchuk.

"The crew did not feel threatened," Kowalchuk said, but "maintained surveillance" of the men.

Authorities took three passengers, including the two acting suspiciously, into custody when the aircraft landed in Detroit, Kowalchuk said. There have been no arrests, said Sandra Berchtold of the FBI.

Wintner said the airport's response was standard for such a situation. "The response would have been the same yesterday as it was today, and it would be the same tomorrow."

In a third incident, a carry-on bag at Kansas City International Airport caused a security guard at a checkpoint to be concerned, said airport spokesman Joe McBride.

A man was uncooperative when asked if if the bag could be searched and was subsequently detained, McBride said.

Terminal B was closed and evacuated about 9:30 a.m., and a bomb squad was brought in. The squad used water hoses to open and inspect all of the man's bags, including those that were checked, McBride said. The terminal reopened by 2 p.m.

The FBI's Bridget Patton said agents went to the scene. No explosives were found in the luggage, she said.