Travel may take days to return to normal after Hurricane Irene 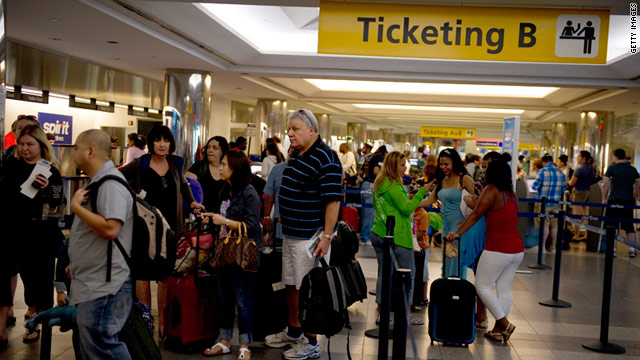 Tune in to "Piers Morgan Tonight" at 9 ET for a closer look at how the media and government reacted to Hurricane Irene. Was it too much, and how much did it cost?

(CNN) -- Hurricane Irene has come and gone, but many travelers are still going nowhere fast in the aftermath of the storm.

The airlines are just recovering after canceling thousands of flights over the weekend, some mass transit systems are still struggling, and train service remains sporadic in parts of the Northeast ravaged by Irene.

The problems created a ripple effect throughout the country, with fliers who were trying to get into the region also encountering frustrating delays.

"We got to go to work. How are we going to do that? Now we're thinking of driving to New Jersey because we can't stay here all this time," said Bridget Corg, who was trying to return home from Miami, CNN affiliate WSVN reported.

Explain it to me: Weather forecasting
RELATED TOPICS

"I'm ready to go so I can go to work. Get to the airport, cancellation," said Jerry Delerme, who was trying to fly to New York from south Florida. "I'm flying standby, so that means I'm not getting home probably until (Tuesday)."

It will take a few days for everyone to get where they want to go, said Mateo Leras, a spokesman for JetBlue.

The airline is adding several flights Monday to take care of passengers who couldn't fly over the weekend.

Airlines and airports getting back to normal

About 650,000 to 700,000 air travelers have been grounded since Friday because of flight cancellations prompted by Hurricane Irene, said Daniel Baker, CEO of FlightAware.com, a flight tracking service.

The good news is that many of the affected passengers made alternate arrangements, so not everyone is in the backlog that carriers are dealing with now, Baker added.

"The airlines are hoping to be back on a regular schedule this afternoon, and so at least the cancellations will dwindle down," Baker said.

"But it will be through the week" before the backlog is resolved, he said. "There's no question that there's really widespread ramifications."

Did Irene affect you? Share photos, video, but stay safe

Airlines are urging passengers to check their flight status before leaving for the airport.

Those who are stuck and must pay out-of-pocket to stay at a hotel should go online and look for some great last-minute rates, said Anne Banas, executive editor at SmarterTravel.

She recommended checking Hotels.com or downloading the Hotel Tonight smartphone app for a list of same-day deals.

"You can also sometimes call a local hotel and ask for a 'distressed travelers rate.' Usually it's a discount they offer in situations like these, when there are storms and people can't get out of town," Banas said. "Doesn't always work."

But there's hope stranded fliers will see an improvement soon.

Tuesday and Wednesday are usually the slowest air travel days of the week, which will help travelers get on the flights they want, said Todd Lehmacher, a spokesman for US Airways.

The airline reached out to 90,000 people ahead of the weekend to reschedule their itineraries, he said.

Most passengers were accommodated before the storm began, American Airlines spokeswoman Andrea Huguely said. The carrier is considering extra flights if there's a lot of overflow and demand, she said.

Airlines including American and US Airways said they don't expect any impact on Labor Day travel.

"This is a well-prepared(-for) and well-planned event," Baker said. "The airlines announced it really well, they canceled flights, and they're getting back going again. ... It comes off as very organized."

Still, some travelers abroad are having trouble coming back to the United States.

CNN's Deborah Feyerick, who has been traveling in Greece, was supposed to return to New York on Sunday, but the first flight on which her airline could rebook her was Thursday.

Australian traveler Shaun Cunningham is stranded in Costa Rica. He was supposed to fly back to London via New York, but his travel agent told him he wouldn't be able to take that route until September 10. So Cunningham paid 1,200 pounds for a one-way ticket that connects via a different country, allowing him to fly out sooner.

All Amtrak service between Boston and Philadelphia is canceled because of the extensive flooding, debris on tracks and power issues due to the storm.

There's also no Acela Express service between Boston and Washington.

The Southeastern Pennsylvania Transportation Authority has suspended a number of regional rail lines.